Skinny Puppy – The Greater Wrong of the Right Live DVD 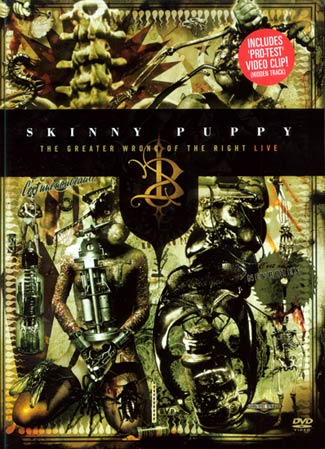 For a band that is such a visual one with their elaborate stage shows, it is surprising and also a crime that it has been 18 years since they last had a video document of one of their shows made available for commercial release. You’d have thought it would have been a no-brainer for them to have released a video from every tour they did because of each having its own very unique stage show that no doubt left its impression on countless fans (myself included), but for some reason, it never happened.

Nine years after the band called it quits, and after the tragic passing of Dwayne Goettel, surviving members (and Skinny Puppy founders) Nivek Ogre and Cevin Key worked out their past differences and united to reform Skinny Puppy. It was no small task, the band has quite a legacy and to be able to recreate it, or simply to just continue it was not going to be easy but I am happy to report that they pulled it off remarkably well. At first, the new album was shocking to me because it didn’t sound exactly like the Skinny Puppy I know and love from the past, but in hindsight (and after the album really grew on me) they took the right approach and not only preserved their legacy, but are adding to it.

This DVD was recorded on their second North American tour in the fall of 2004 in Toronto (the city their only other live video, Ain’t it Dead Yet was shot in) and Montreal in their former home of Canada. It is a full-on pro affair with lots of different cameras and the camera work is top-notch. Shooting Skinny Puppy live can not be an easy task since they tend to keep things very dark, partly to showcase the video running behind them which is an integral part of their stage show.

The image quality could not have been better, it simply looks amazing and is in anamorphic widescreen. There is two options for the sound, you can have straight stereo, or you can have 5.1 surround. Both sound stunning, though the 5.1 was a little light in the low-end of the audio spectrum, but made up for it with its filling of the room and the cool little effects that showcase the surround technology. A perfect example of a song that sounded pretty amazing in 5.1 was “God’s Gift (Maggot)” which is my absolute favorite song to see the band play live. Throughout the film, it not only shows the action on stage with nice, clean edits and great focus on the props and mannerisms of Ogre, but it also occasionally cuts to the images that are being displayed on the numerous video monitors on stage. The effect to me was very similar to how I watched the shows when I attended them, watching the band and Ogre for awhile, then glancing at the video screens and soaking in some of that for a bit, and then back to the action. Occasionally they also overlay the imagery on top of the live action which was another effect that added another cool element to the experience.

The live show was around 100 minutes long and contains 19 songs, which was the longest they’ve ever played (they used to average 80 minutes a show in the old days) and the set they did on that tour did a very good job covering their career. The first four songs were all from the new album, The Greater Wrong of the Right, after that they play a fair mix of stuff from almost every record they ever released (only playing “Convulsion” from Too Dark Park in an encore and an altered version of “Reclamation” as the main set’s closer seemed odd as that is one of their strongest records which should have been better represented) with some surprising inclusions. I mean who would have guessed they’d play “Human Disease” from the Vivisect VI album ever again after that album’s tour, and it is another one of my all-time favorites!

The second disc on here contains the extra features and while the list may be short on paper, don’t let it fool you, there is some prime stuff included on it. First is Information Warfare, a little mini-documentary on the current war in Iraq that further proves just how fucked up it is and the harm is is doing to the soldiers being sent over there. It is 32 minutes long and could perhaps be almost as much of an eye-opener as Michael Moore’s Fahrenheit 911. It really leaves you with a bad feeling about just how wrong the whole thing is and how the government mistreat the soldiers they ship over to war. Eurotrauma is a documentary shot on a video camera by the late Dwayne Goettel (and sometimes others in the band/crew as he handed the camera to them), and edited by Ogre. It showcases the band on their 1988 “”Head Trauma” tour. It is a nice glimpse into the life of the band on the road. You get to see their problem with promoters not paying, some poor clubs they had to play in, the hash bars in Amsterdam, people they met, and even some occasional footage from those shows. It is really cool to see how that stage show was similar to what became the Vivisect VI tour with Chud the dog, the torturing of Ogre, etc. but with some different songs being played. Its hard to believe that was 17 years ago now! The footage obviously is of VHS quality since it was not shot on a pro camera, but it held up well and was a really great inclusion on what is already a nice package. The disc closes with some footage from the Too Dark Park and Last Rights tours. Both videos are a collage of footage from the particular tour set to one of the songs off the respective album. It does a great job highlighting what those tours were all about, and was a nice trip down memory lane for those of us who were at those shows. My only wish that there was more of it! The total time of disc two is 72 minutes.

Overall, a really excellent package from top to bottom with very little to complain about. The live disc does not allow you to change audio options during the feature. You have to choose your option before you start watching it and the only way to change it would be to stop the disc, and start over. In order for me to compare the audio tracks side by side, I had to pick a song and watch it one way, go back to the main menu to change the audio and then start the feature again. The other one is that since this was shot at two different shows and edited together, sometimes what you are hearing and seeing on screen do not jive up. For example you’ll see footage of ogre singing or speaking something however in the audio it isn’t there because the footage being shown is from the other show. You’ll occasionally see what looks like odd movement on Ogre’s part because you were watching footage from one show, then it edits to another where he was moving differently. These are pretty minor though and don’t really detract from the enjoyment of the disc at all. A casual viewer will likely not notice it.

If you are a Skinny Puppy fan either of the hardcore or casual variety, this DVD is a mandatory purchase. It does a wonderful job of documenting last year’s tour and is a perfect souvenir, or something to get to see what you missed if you weren’t there. It also would make a great introduction to someone who hasn’t heard or seen the band before as you get to see and hear what they are all about on a pair of discs. William Morrison and crew should be commended for a job very well done. Hopefully this will inspire them to dig through the vault and release some more discs of past tours. I for one would love to see the show recorded 10/20/88 in Chicago, filmed by Dead Battery Productions, finally see the light of day. Since they are a band that should definitely be seen as well as heard, it is about time something like this DVD was released. Thank you! This is going to be getting a lot of repeat viewings over here at Combustion Manor.