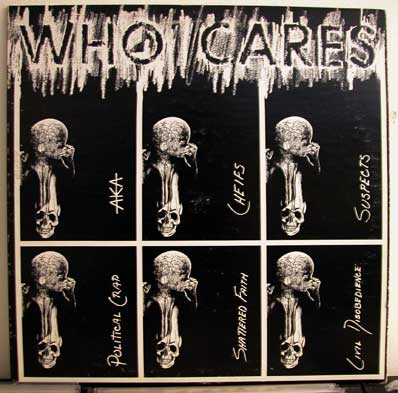 Selections from The Punk Vault [Who Cares]

This is another in what is becoming a long line of records that should be reissued on some sort of CD but haven’t. This one also was a request from my pal, Rob V. The late 1970s/early 1980s was a hotbed of punk rock and hardcore in Southern California. There was more bands coming from there than anyone could keep track of, perhaps even if you lived there at the time! Sure you had the well known bands from the area that are now considered legendary and still sell records and CDs today, but you also had lots of more obscure bands that never got the recognition they may have been deserving of. This compilation contains at least two that fit that category.

In 1981, American Standard Records, a new label that to the best of my knowledge only put out this one record, formed and decided to put out a compilation of local bands who at the time either didn’t have, or would never put out, a record! The lineup was The Cheifs (whose only recorded output was a 7″ and one other compilation), Shattered Faith (who I don’t think had yet put out their Posh Boy 7″ when this compilation was recorded), AKA, Suspects (who to the best of my knowledge never put out a record of their own which is a shame), Political Crap (featuring Duane Peters, who still plays punk rock today), and Civil Disobedience. The only band from here who really lasted was Shattered Faith, who put out the 7″ on Posh Boy (as well as appeared on a compilation) and then put out two LPs and actually still are playing today.

The record is pretty standard fare SoCal punk rock/hardcore, which in 1981 was at its prime. Aside from my well-known love for The Cheifs, the Suspects tracks on here are the real standout for me and its a shame they never put out a record of their own (at least that I’m aware of). The Shattered Faith track featured here is a completely different version than what would appear on the aforementioned Posh Boy 7″. I also included a Suspects track for the sole purpose as they were really good and deserve to be heard. The whole record was recorded at Sound Off Studios in Compton, CA, a city that would later gain national recognition in the world of rap music thanks to the band NWA. I wonder if the studio still exists today.

As always, if you have any additional information, were in any of these bands, or were the person/people behind American Standard Records, please get in touch.

Listen to “I Love America” from Shattered Faith

Listen to “Hollywood Nightmare” from Suspects