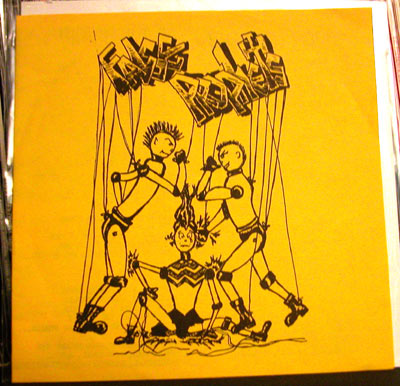 My introduction to False Prophets came from the amazing P.E.A.C.E compilation on R Radical Records. That compilation single handedly introduced me to more great bands than any other compilation in history. I used to bring the booklet to school that came with that compilation and read it over and over during study hall. False Prophets had a song on there called “Banana Split Republic” and it was one of the many standouts of that record. It was soon after that they released their first album on Alternative Tentacles, which I promptly purchased. Eventually I tracked down their two 7″s that came out prior to the LP, on their own label, Worn Out Brothers.

As for the band’s history, aside from being from New York, and George Tabb doing time in a later incarnation of the band, I know little else about them, however Stephen Wishnia of the band provided this history for the Alternative Tentacles website.

False Prophets were formed in June 1980 by singer Stephan Ielpi, bassist Steve Wishnia, and guitarist Peter Campbell. Matt Superty, Stephan’s cousin and scion of a long line of drummers, joined soon afterwords. We quickly made a name for ourselves with raw, danceable energy and Stephan’s welcome-to-my-nightmare theatrics, playing gigs at Max’s Kansas City and predawn sets at the A7 Club. Our first single, “Blind Obedience” b/w “Overkill” and “Royal Slime” came out in June 1981. Musically, we were part of punk-rock’s second generation, which included the Undead, Heart Attack, Reagan Youth and DC transplants the Bad Brains in New York, and the Dead Kennedys, Black Flag, D.O.A., and Minor Threat in the rest of the world. We also drew on British post-punk bands like Joy Division, Public Image and the Gang of Four; pre-punk rockers like the Kinks and Stones (Steve and Peter) and Alice Cooper and Mott the Hoople (Stephan); and rap, reggae, and funk, the sounds of the boom boxes on New York’s streets.

So we never quite fit the hardcore stereotype, being too varied musically and not thuggish enough personally. “Good Clean Fun,” our second single, released in 1982, was both our first hardcore-speed song and a criticism of mosh-pit violence. Matt quit soon after, replaced by the Undead’s Patrick Blanck, Donna Baril, and Ned Brewster, who made his debut at an all-night anarchist ball on New Year’s Eve, 1983. We recorded our first album the next summer, financed largely by Stephan’s uncle hitting the triple at the Aqueduct racetrack in Queens.

Alternative Tentacles put the album out in early 1986. By then Peter was gone, having quit after a Southern tour in the summer of 1985. The band toured heavily over the next two years with new guitarists George Tabb and Debra DeSalvo, recording the Implosion album in early 1987. It broke up during a disastrous West Coast tour that fall. Stephan and Debra then re-formed it with new musicians and kept it going for several more years, releasing one EP. (Steve and George went on to form Iron Prostate, while Ned eventually wound up in punk-blues stalwarts the Senders.)

Ronald Reagan was inaugurated a couple days before our first two-night stand at A7, ushering in a new era of greed, puritanism, and hate. We wanted to rage against all that, and did. We also wanted to write great songs, have fun, and get possessed and out of our heads playing rock’n’roll. Listen to Blind Roaches and Fat Vultures and see how we did.

A good portion of the early False Prophets material is available on a CD from Alternative Tentacles.

As always if you have any additional information, or were in False Prophets, please get in touch.

Listen to “The Functional Song” from the record