A tourist in my own city

Friday before I went to see the MDC show, I spent a little time with my family and did a little tourist activity in my own city of Chicago. My cousin picked me up and we met my sister who was in town, and my other cousin for lunch at a pizza place and then went back downtown to see the Palmer House hotel where my sister was staying and to check out Millennium Park.

Millennium Park was a place I was aware of, but never bothered to check out simply because driving and parking around the Loop is a royal pain in the ass (not to mention expensive). My sister wanted to see the place and since we were there and actually found a spot to park (with super expensive meter rates of a quarter for a mere 5 minutes), we took a walk over there. The place is very clean, you can tell the city invests a fair amount of money for maintenance since the park is their latest gimmick. When we waked in, the first thing you see is these two giant towers that have water pouring off of. They look somewhat menacing yet they were also cool and the water hits the ground and is somehow contained in the area between the towers. 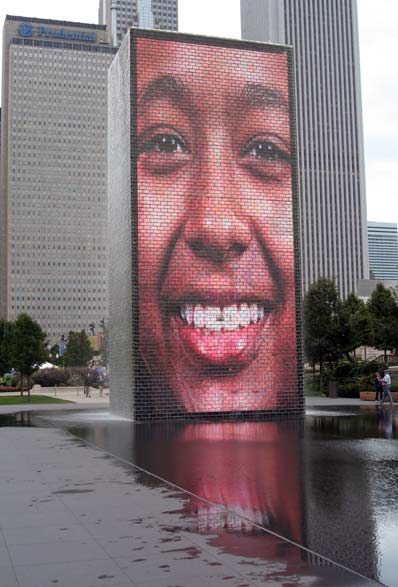 The towers on the sides that face each other have video images of different peoples faces. The faces make some different expressions and look around, it is almost creepy looking at times. The faces will change between different races and genders if you were to sit there for a long period of time. After a bit of time passes, the face changes and then the thing spits out water into the center. 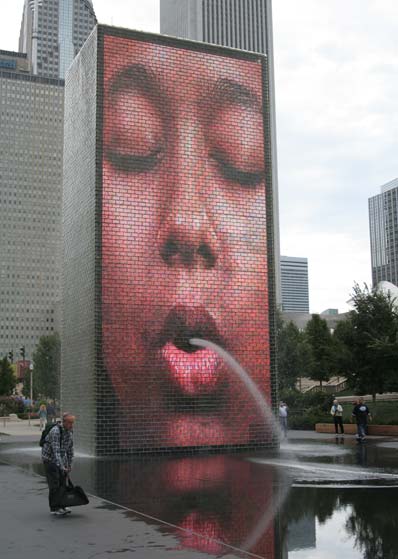 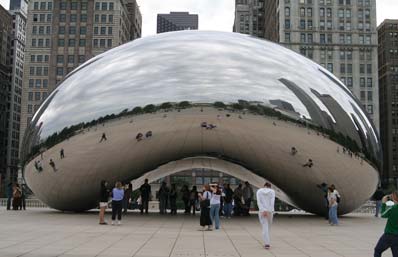 You can walk underneath the bean too and if you look up, you get some weird and interesting different reflections. I could see myself in like a half dozen places at once in there. 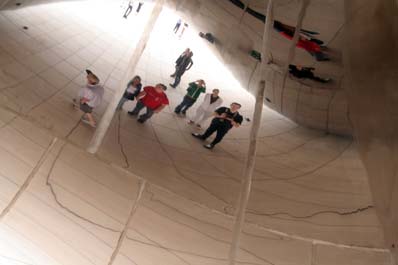 Aside from that there was a garden area full of different trees and plants, some water and there was a bandshell area that had seats, and then a lawn area. It was like a smaller Tweeter Center, but cleaner and they had speakers everywhere so I’d assume you could hear the show a lot better than at the Tweeter Center even if you were all the way back in the lawn. My one cousin told me that a few weeks ago, REO Speedwagon played there. That would have been quite a site to see I’m sure. Above the bandshell area was some cool metal structures and if you looked up a little higher, you got a cool glimpse of the city skyline.

I don’t recall what used to be in the spot where this park is located as I never spent much time in that part of downtown, but the park itself is pretty neat and would be a nice place to eat your lunch outside on a nice day. They, of course, had vendors set up selling “souvenirs” such as coffee mugs, etc. which were of zero interest to me. If you find yourself in the area, its not a bad way to kill some time, not to mention it is free which is the most important form of entertainment for me these days!