Murphy’s Law – Up With Us Down With Them DVD 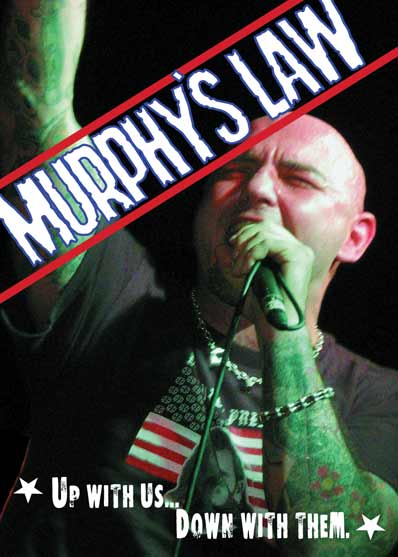 Murphy’s Law – Up With Us, Down With Them DVD
Music Video Distributors

Murphy’s Law has been around for a very long time. They formed around 1983, but aside from a demo, didn’t put out their first record until around 1987. That record got really heavy play among my friends and myself and I even went to see them open for Beastie Boys and Fishbone in 1987. They put on a great show, and when I saw them again in the late 1990s, they still put on a pretty good show. They never called it quits and have been regularly playing shows and occasionally releasing records but nothing ever seemed to get the same recognition as that first one.

This DVD contains two separate live recordings; one in their hometown of New York City, and one in Westchester, PA. The song selection (18 in all) spans pretty much their entire career, with a good amount of songs from that infamous first record. The band puts on an entertaining set and the atmosphere really is much more of a party rather than a show, with the band drinking and even smoking on stage and Jimmy Gestapo giving some entertaining between song banter.

Both shows are recorded on a few cameras, and edited together, however the camera work is not only amateurish in quality, but at times it is often really shaky. It is as if the cameramen were also partaking of the smoking and drinking and couldn’t keep the camera steady in the wide shots. It actually was a distraction while watching it. The footage is also a little dark. The overall quality is something that you would expect to get in the bootleg tape trading circuit, except with good sound and it was shot on more than one camera. The sound is actually quite good on here, which made up a little for the visuals, but not enough. I found myself listening more than watching it.

There is also some bonus material on here in the way of some additional live footage from some other shows that wasn’t as good in quality as the main feature. There is four additional songs in this bonus footage. Because of the somewhat lacking visual quality, only the most die hard fans would probably want to pick this up, it at least was good for a listen to what their live show is like.