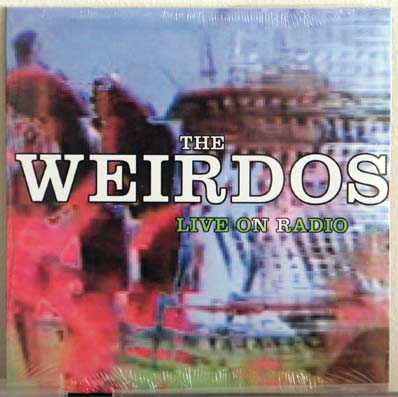 The Weirdos are one of the first, and one of the absolute best bands from the first wave of Los Angeles punk. It is no secret that the era and locale is my favorite of any punk scene, including my own. While The Germs got all the attention, it was The Weirdos who gave them their first show and helped pave the way for generations of punk bands that followed. They had a great look and ever better tunes, why they never got the acclaim that other bands did is one of life’s great mysteries.

In their short time together, the band put out a couple of singles and a couple 12″ EPs before disbanding for a decade, only to reform, tour, release an album, then go on another decade-plus hiatus. The hiatus ended with the release of We Got the Neutron Bomb: Weird World Volume Two and the band hit the road and did a small tour of the USA. It was on this tour that they stopped by WFMU in New Jersey on July 22, 2004 to play live on the air, which was thankfully recorded and is now presented to you on this special edition CD.

They may be old enough now to be your parents, but age has been very kind to The Weirdos because those guys can still go like they were in their twenties! On this particular appearance, they played ten songs. While suspiciously absent are the big hits; “Solitary Confinement”, and “We Got the Neutron Bomb”, there is still ten songs of Weirdo greatness. Of The Weirdos early material, I don’t think there exists a single bad song and this live document is proof of that statement. The band were very energetic and recording quality is excellent.

The full track list:
What Will Ya Do?
Shining Silver Light
Tropical Depression
The Hideout
It Means Nothing
Happy People (a long time favorite of mine!)
Pagan
Message from the Underworld
Destroy All Music (the first Weirdos record I owned!)
Helium Bar

The lineup on here was the four-piece (sadly sans-Cliff Roman), the performance was excellent and this has been getting multiple repeat listens ever since it arrived in my mailbox. The CD can not be purchased in stores, you can only get it from the band themselves at a show or direct from Frontier Records. If you got to see them on last year’s tour, you know what a treat was and now you can have a great sounding document of that tour. If you missed out on seeing them, now you can hear what you missed.

The Weirdos website (where they are STILL using photos of mine without giving me credit!)

The Weirdos on myspace.com