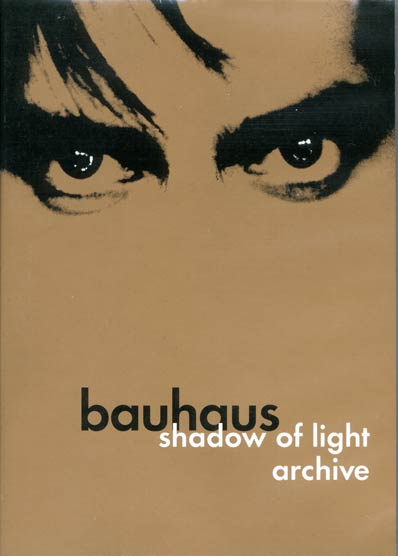 Back when I was getting into Bauhaus, I bought two videos of theirs at a record convention, they were called Archive and Shadow of Light. It turned out the copies I purchased were bootleg copies and that the originals were already well out of print, and this was in the late 1980s. For at least the past 15 years, the only way a fan, old or new, could get these videos was by trading or buying illegal copies off of ebay. This problem has thankfully been remedied by the release of this DVD and I’m sure it will be to the joy of fans everywhere.

I had no idea this DVD was in the works, I never read anything about it and there is no mention of it on the Bauhaus website, even to this day! It wasn’t until a review copy appeared in my mailbox that I found out about it, much to my delight when I opened the package. It really made my day. My first thought was, “Wow, its about time that they reissued these”!

This compiles two separate video releases both which were released posthumously in the 1980s. Shadow of Light, which is the first half of the DVD, is a collection of live footage as well as MTV style music videos. The live footage is of very good quality and was recorded in 1982 at The Old Vic Theatre in London. The video starts off with perhaps their most famous song, “Bela Lugosi’s Dead” from this show, The band at this time were at their absolute peak and the performance is top-notch, a truly great (and really the only) document of the band at the time. The video for “Telegram Sam” follows and the rest of the video pretty much alternates almost every other song between live performance and video. The highlight for me is the video for “Mask”, which is my absolute favorite Bauhaus song. I think the imagery in this particular video was an influence on Marilyn Manson a few years ago as there was some similarities in there. You can’t fault the guy for having good taste.

Archive is the second feature on this disc, and it was basically a concert film put together by Christopher Robin Collins. The film tells the tale of an old man in an abandoned house who finds an old projector and phonograph which is playing Bauhaus footage and music. In between each song it cuts back to this old fellow in that room with the equipment. It’s like a haunted house, but haunted by the ghost of a great band. The song selection for this video mostly consists of the faster variety of the band’s repertoire and I believe the live footage was shot at the same time as the stuff on Shadow of Light. The total time for the disc is around 90 minutes.

Since the masters were originally shot on video, don’t expect modern day DVD quality on this, however considering the source, the video quality is very good and certainly far better than Nth generation VHS dubs, or even 20 year old original VHS tapes for those have them sitting on their bookshelf. The sound has two options; 5.1 surround and straight stereo, both sound very good with the 5.1 option sounding the best. There was no noticeable audio hiss, it apparently has been cleaned up quite well, sounded great, and filled the room nicely. Aside from the very beginning of Archive, there was no major video glitches and like I said, based on the source, it looks very good. The menu is easy to navigate, you pick which feature you want to watch and can then either play it from start to finish, or pick whatever song you want to see.

As a rather long-time fan of Bauhaus, I am very excited that these videos are now collected on a very affordable DVD for the world to enjoy once again, or even for the first time. I’ve always been one to encourage documents like these to get preserved and made available again and I’m glad to see that others felt the same. Now I can get rid of those 15 year old VHS copies I have!