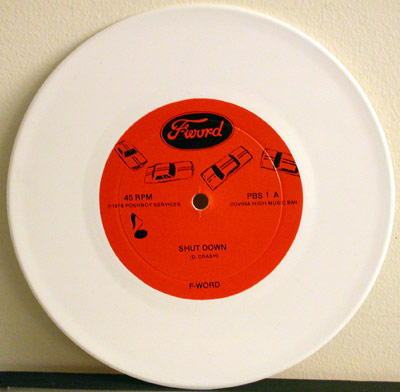 Selections from The Punk Vault [F-Word]

Note: Since this originally “aired”, F-Word founding member, Dim Wanker, contacted me and wanted to share his story of the F-Word history, as it is much different than the Posh Boy version. I being the one of the belief everyone should have their say, I was more than happy to offer to update this entry with Dim’s story which is posted below the Posh Boy one.

My first exposure to F-Word was on one of the Posh Boy Compilations, perhaps it was “Posh Hits Volume One” but I’m not quite sure. It would be awhile before I bought their one and only album, which was a live one. To me the band was an acquired taste, they eventually grew on me but the original purpose for buying the record is the fact that if I like a record label, I tend to collect that label as a whole and buy everything they release. In hindsight, I’m glad that I collect the way I do because I came to appreciate a lot of records purchased solely for what label they were on when I’d go and revisit them later, to which this record is a prime example of.

F-Word were part of that first wave of Los Angeles area punk from the late 70s. It was fronted by the late Rik L Rik. Since Posh Boy was not only their record label, but their manager, I went to the man himself, Robbie Fields, and asked him to share his version of the F-Word history as was there and here is what he wrote.

F Word! was very much part of the initial 1977 L.A. punk explosion, centered around the Masque, an underground (literally and figuratively) club off Hollywood Blvd. in then seedy Hollywood, California. One key difference: the group members were a little younger than the other groups making their mark: The Screamers, Weirdos, Dils, Alleycats, Nuns, Skulls, Germs, Controllers and Avengers. I came to meet F Word! when working the midweek door for Masque owner, Brendan Mullen, and I was soon asked to manage them.

Of course, I had no prior experience as an artist manager, but I did speak with an English accent and that must have seemed a plus at the time.

The group revolved around the songwriting axis of guitarist Kenny Sercu aka Dim Wanker and singer Richard Elerick aka Rick L Rick (later : Rik L Rik) who must have been 17 at the time. Even younger was the bass player. The drummer was the weak link and soon departed and was replaced by a much older professional drummer out of Chicago (ex City Boys) that I had found, an aspiring actor named David Schultz aka Dutch. Dutch proved the glue that held the group together during their short, incandescent career. He owned a never commissioned checker cab that was ultra reliable as band transportation; he provided some maturity in a very immature mix and he knew that both frontmen had something few had: charisma. So while Wanker played the most anarchic guitar, making you wonder he knew what song they were playing at that moment and Rik was doing his best Iggy impersonation of acting as though he was not supposed to be singing, drummer and bass player provided an awesome backbeat.

Rik became a favorite of all the Masque scenesters. Kenny and Steve the bass player were a little rough around the edges. It was inevitable that Dangerhouse would become interested in the group and everyone wanted to have a single released on Dangerhouse as
1977 folded into 1978. Unfortunately, F Word were a low priority at the Dangerhouse collective and it soon became apparent that the squabbling between Wanker and L Rick were torpedo the group before they went into the studio.

Meanwhile, their dutiful manager had been securing the group prime gigs: opening at the Whiskey for Screamers and The Weirdos and taking them to San Francisco frequently to play Mabuhay Gardens on weekends and playing with the top S.F. groups back then, the Nuns and Avengers. As it happened, the Mabuhay soundboard was always connected to a reel to reel deck and I took advantage by recording the many sets F Word! played at the club. Regrettably, we only had a mono mix from the board and not all the instruments were mic’d. So, at the point where it became apparent that the group was in its death throes I proposed that we give up on Dangerhouse and release the live material; this idea was met with hostility from both Wanker and L Rick who were not happy with people hearing their warts and all performances. But the other 2 members sided with me and felt we had to have something to memorialize the group and its impact. Much later on, Rik L Rik became reconciled to the F Word! recordings and he was extremely happy when top Swedish group Sator re-recorded “Government Official” for their Barbie Q Killers album and charted with it as a single, something that never would have happened but for the release of the F Word! live material.

Count me in as one of the people who is glad that the live recordings came out, as if it not for them, we’d have no document of F-Word. Thanks to Robbie Fields for the story.

Founding member Dim Wanker has this to say about the F-Word history.

If you can get you’re hands on the liner notes to the Masque benefit cd’s (F-word,X) they’re written by Rik L Rik and fairly accurate from Rick’s perspective as far as I’m concerned, up to that point in history. They were written in 1999. Rick died the next year. We had played F-word reunion gigs throughout the 90’s and we were very close friends. As a matter of fact we were in the process of forming a punk super group prior to his death including myself, Rick, Pat Smear (Germs), Don Bowles (The Consumers) and Pat, Rick’s friend whose last name alludes me, in 2000.

But going back to the 70’s, Rik and I were like one, a team for three years before and during our flash run. Though we had typical differences (few and short), we were tight. It was pretty much his and my group on an even footing and we saw each other nearly every day for that period. We co-wrote every song together with myself sometimes creating the music then Rick adding words with a rare occurance that rick would come up with some words and we would then put the music. This should indicate how we were the driving mechanism of F-Word together. We changed bass players three or four times as well as drummers a number of times during the short Hollywood experience, but Rick and I were the crux.

As per Posh Boy’s version of the break up of F-Word, It’s entirely fictional. Posh Boy who managed us for only a few months, out of the blue one night in 1978,( we were booked at the Whiskey A GoGo), came to meet us halfway accross Sunset Blvd. with a handful of records gleefully shouting “here’s you’re new record boys”. This was of course a complete shock to us and upon listening, quite a disappointment. We believed in our music a great deal and were moving up pretty quickly. At this time we were in discussion’s with Denny Cordel of Shelter Records to record and it was our desire to properly produce our songs. All the problems of F-Word were between Robbie Fields and myself, he had an agenda to seperate Rik and I. Where we had always done writing songs, interviews, and photo sessions together, Robbie was engineering occurances for Rik seperate from myself which became a wedge. After one night, Robbie (late twenties) kicked me (17) in the stomach for some inane reason. This coupled with his decision to release a record without even our knowledge or OK and the wedge he was creating made up my mind to leave. So I left town and went to my old home in Azusa and did not speak to Rik or anyone else tied to F-Word for six or so years. Then in 1986 at the Coconut Teaser for a signing party of Rick’s band, The Snake’s, we met again and Rik asked me why I left the band, he had no idea. I explained to him my reasoning, Robbie Robbie Robbie, and we soon became close friends again for the last fifteen years of his life, playing gigs until the time in which he became sick. My conversations continued with him until a week before his death though he was bed ridden for half a year. Many bands have covered our songs including your mention of Sator (Sweden), True Sounds of Liberty (CA), and others on record. We played probably our best show last, at Bergimont Station in late 1999 w/ X, The GoGo’s, The Crowd and MC’d by Pee Wee Herman to a maximum crowd filling out into the street.

The record orignally came with no picture sleeve on black, then later red and white vinyls. The white is the hardest to find and Robbie suspects they did some of those when they pressed the Rik L Rik 7″. I actually need a copy of this on black vinyl without the sleeve if anyone has one for sale/trade. Around 1990 it was reissued with a picture sleeve that was numbered on the back and had the silver labels that became common on all Posh Boy releases. This also has the distinction of being the first release on the label.