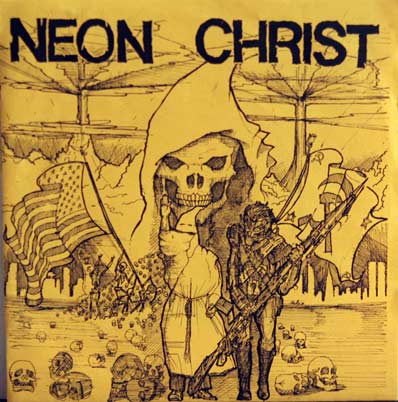 Like many bands on the monster-sized list of ones I like, my first introduction to Neon Christ came from a compilation. I had to be maybe 15 years old when the P.E.A.C.E. compilation was released on R Radical Records. This double LP was chock full of more punk rock than I’d ever seen in one place before. Some of the bands on there I knew, which is why I wanted it, some I only heard the names of before so it was a good way to hear those, and some I never heard of before at all. Among the many great songs on that record, one of the absolute standouts was a song called, “Ashes to Ashes” by this band called Neon Christ. I had never heard of them before, but not only did they have a great name, but that song is among my favorite hardcore songs of all time to this day. I think I seriously must have worn a hole in that part of the record on the first copy I ever owned of that compilation (since retired and replaced due to the fact I literally wore it out).

At the time of that compilation, Neon Christ had released this 7″EP and I being of meager funds at a young age, never sent away for it and I never saw one at the store. Eventually I’d find a rather beat up copy years later which had to do the job for me for quite a few years until just recently when, thanks to a most generous donation to The Punk Vault by Randy, singer for Neon Christ, I now have a clean copy (with the rarer sleeve no less). Randy literally made my year with the NX care package he sent me recently. I also asked Randy if he’d be so kind as to pen some Neon Christ history for this feature and he was happy to oblige.

Neon Christ formed in the fall of 1983, shortly after guitarist William “Kip” DuVall broke up his vanguard punk band AVOC (Awareness Void of Chaos). After various personnel changes, the final lineup of Jimmy Demer-Drums, Danny Lankford-bass, William DuVall-guitars and Randy DuTeau-vocals was formed. Neon Christ made its debut New Years Eve 1983 supporting Scream and Atlanta band DDT. In March the band scored an opening slot with SF thrash kings DRI, who were impressed enough with the young upstarts to enthusiastically promote them as their own tour continued up the east coast.

Neon Christ’s debut 10-song EP came out in June 1984. Upon its release the band hit the road for a six-show east coast tour. Despite car troubles and $20 payouts they made it to New Jersey for a rousing finale at the Court Tavern with New Jersey favorites Adrenalin OD. The close quarters and regular playing made NX a much tighter unit. They ended the summer by recording four songs for a proposed album with Nick Jameson, engineer for 70’s rock band Foghat, at his home studio on Labor Day. Though the album was never completed, “Ashes to Ashes”, with its atmospheric intro diving into a frenzied thrash attack, was placed on the Peace/War compilation released by R Radical Records in early-1985. The double-album featured the top 55 punk bands in the world. The song was placed third on side one and the exposure generated an even larger fan-base in Europe and Asia.

By 1985 much of the bands early material was put on the shelf. William (Kip) DuVall’s songs went from blistering, technical thrashers to slower, heavier tunes with a driving beat and more-metaphorical, yet no less politically-pointed, lyrics. The development of the band was not lost on local or national critics. Once derided as merely a “teen punk band”, knowledgeable music outlets started recognizing intricate music inspired by a variety of sources from heavy metal to avant-garde jazz.

Neon Christ took its role as a radical band very seriously. The band aligned itself with groups working to free African musician Fela Anakulapo Kuti and South African political prisoner Nelson Mandela. They played many benefits, worked within their community for progressive causes and played a participatory and organizational role in such political action networks as No Business as Usual. Their attack on Reagan-era policies proved frighteningly prescient with the advent of “D-U-B-Y-A”.

The band played its last show in February 1986. After a couple of preliminary forays the band reunited in January 2006 for the purposes of filming a documentary.

There was 500 of these records pressed, most of them had a white sleeve while some of them had the yellow sleeve pictured above. In the late 1980s, this record, along with the aforementioned unreleased songs, was released by the band as a double 7″ EP on their own F-King records. At the reunion show, the band made a limited amount CDRs of the double EP with cover art which were available for sale at the show. Despite the fact that they called it quits years ago, the band members have always remained friends and they felt that they never had proper closure to Neon Christ, which is why they did the reunion recently, as a way of having a proper send-off. Sadly I wasn’t able to attend. You can see some of what you missed on the band’s website.

Thanks a lot to Randy for the story, and for his most generous donation to the vault. Hopefully in the near future the Neon Christ material will be commercially available on a CD. If I had the funds, I’d offer to do it on my own label!

Listen to “Draft Song” off this record: