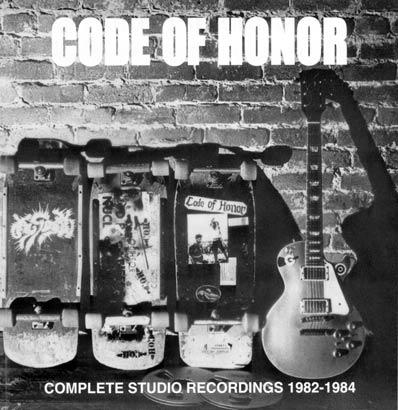 Code of Honor were a Northern California punk rock band who sort of formed out of the ashes of Sick Pleasure, whom they shared a split LP with more than 20 years ago. The band was formed by Michael D. Fox, who was one of the two founders of Subterranean Records, and who played in more than his share of bands back in the day, as well as recording quite a few as well in his studio.

During their two year life-span, Code of Honor put out a 7″, the aforementioned split LP, and their own LP before calling it a day. Their early material was top notch hardcore punk that was as good as any of their peers at the time. As they progressed, they slowed down a bit and got a bit more musical and experimental, yet were still very enjoyable. I think the fact that the band’s records have been out of print for well over a decade has harmed their legacy and prevented them from being as much of a household name as many of their peers from the same era. This of course can finally be remedied as everything they ever recorded, including an unreleased song, is included on this CD.

The songs are presented in chronological order and all the lyrics are printed inside the booklet, along with some very interesting liner notes from Michael D. Fox about his punk rock history and how it led to starting Code of Honor sprinkled with some great old band photos. The packaging is really nice overall, not to mention the tunes sound as good to me now as they did back when I was in high school and heard them for the first time. I’m glad they finally got around to reissuing this material for the masses, and here’s hoping the Sick Pleasure material will be next!