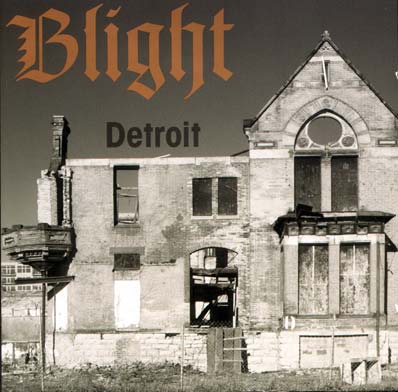 In the early 1980’s, Touch and Go Records put out some really great punk records from Midwest hardcore bands. Negative Approach, Necros, Meatmen and The Fix singles have become legends in the minds of hardcore punk record collectors, but there were a few singles the label did that kind of got overlooked and I felt never really got their just due, and the Blight 7″ is among them.

Blight was a short lived band formed in the ashes of The Fix. Some of the members decided to start jamming down in their basement and were looking to branch out from the rather strict confines of hardcore. Their clangy, white noise laden, industrial inspired punk rock had more in common with Flipper and Throbbing Gristle than it did with their former band, or the band that Blight’s newfound singer, Tesco Vee, came from – The Meatmen. The songs were sometimes repetitive, off-kilter, wailing, and even sometimes irritating. It was an acquired taste (one which I appreciated) and they weren’t exactly met with open arms from the closed minded hardcore crowd they were once catering to in their other bands. They put out one 7″ in their time together and played only a few shows, most of the time was spent in their basement wailing away and thankfully recording some of the results.

This CD collects everything the band recorded and could find 23 years after their demise. The first four songs are the 7″ and they sound great, even better than they did on the original vinyl. The five songs that follow it are all songs that were recorded at the same sessions that were on the 7″ but were never released until now. Two songs from their 4-track demo follow. These were recorded four months prior to the 7″ sessions and are rougher versions of “Blight” and “Be Stupid”. The disc ends with a 16 minute live set of the band in Detroit in 1982 at a show they opened for the Dead Kennedys. It is a little raw but quite listenable and its pretty amazing they had the foresight to record it at the time. It features every song they had, which are the nine tracks that they had recorded at the time of the original 7″.

The packaging is really well put together. There is some very interesting liner notes from the guitar player, Steve, as well as some from Tesco Vee. Also there are liner notes pertaining to every song in the track list which were quite amusing. A few flyers and the lyrics to the 7″ are also included. As someone who has such a huge love and respect for this old punk rock that I grew up on and changed my life, I am always glad when something like this CD comes along that helps preserve such an important nugget of the past, and done in such a quality package. I give this one a big thumbs up and its well worth picking up, especially if you overlooked it when it first came out like many have, you may find that you appreciate its uniqueness a whole lot more now.