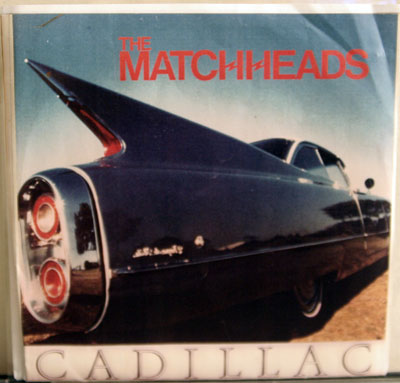 Selections from The Punk Vault [The Matchheads]

My first exposure to The Matchheads didn’t happen until about 20 years after this record was released. In fact if it wasn’t for a couple of songs from this single being included on a compilation, you wouldn’t be reading this right now and I could possibly have missed out on this great single. A couple years ago I received a compilation in the mail from former White Pig, Keith Grave. Keith in his spare time puts together compilations of old punk for various labels and this one was called Meet Me in the Time Tunnel and it was on the Wizzard in Vinyl label out of Japan. The compilation itself was quite good but the real standout for me was this band, The Matchheads. There was a tiny bit of information in the CD booklet and a contact email address, but sadly when I wrote to the address, I never received a response. I was hoping that a former band member might have had a stash of the original 7″ and would be willing to part with one.

Fast forward to a couple weeks ago and the subject of that 7″ came up on the KBD mailing list. Someone posted a link to a website put together by one of the original members and wouldn’t you know it, he had some copies available for sale! I got in touch and ended my search for a copy of this record which now has a happy place inside The Vault. I asked the band member in question, Dan Garcia, if he was cool with my doing one of these features and if he’d share some history for it and he gave me the green light and said to lift the history off his website, which is what you are about to read.

The Matchheads originally came together in the late 1970’s. Patrick Wickler, lead singer and main writer of the songs was an avid fan of punk music. Dan and Pat met in the fall of 1977 and they, along with a few others, were the only people at school that liked punk music. They were excited by the new sounds of the Sex Pistols, Ramones, Clash, Buzzcocks, Jam, etc. and often raced to the local music stores to buy expensive import records of these and many other bands of this era.

Pat and Dan decided to put together a band of their own in 1980. Dan played guitar and wrote some songs. Pat and Dan were joined by Steve Johnson on lead guitar, Ross Wilson on bass and Mansfield on drums. Ross had never played before but was drafted in the same manner that Paul Simeon was brought into the Clash. Ross was a friend who was interested in the music. Mansfield lived down in San Mateo, was married for the second time, a little bit older, and was looking for some action. Mansfield was a big fan of new wave, power pop and mid-60’s British Invasion music. He was brought in by Steve who had jammed with him at a party. Steve was a talented guitarist and was working towards his Broadcast Arts Degree at SF State. Later, Steve worked as a sound man at the On-Broadway Club in San Francisco.

This lineup put together a set of songs, recorded some demos and the single, and played at places like Mabuhay Gardens, Sound Of Music and other venues. The single was recorded in late 1980 at John Altman Studios and was released in the spring of 1981 on the local (SF) Artiste (Sky-Fi) label. The owner of the label, Gordon Whitting currently lives in Oakland, California and is working on a solo album. The single contained the tasty “Cadillac”, a slow moody number and two fast songs, “Pearl Harbor” and “Fat Bitch”. The record got some airplay on the SF State radio station and made number one on its playlist in 1981. Two pressings were made of this single. The first featured a colored picture sleeve on photograph quality paper and was released to many record stores. Copies were found as far away as Santa Fe, New Mexico. Much later, the single made Goldmine Magazine’s New Wave Records book and commands as much as $90 a copy (if one can find a copy with the original picture sleeve). A second pressing was done later that year and copies are still available without the glossy original picture sleeve. Cuts from the single also appeared on the bootleg compilation “Killed by Death”.

Pat was chiefly responsible for penning the songs on the record and had some help from Jan Gyn, a brilliant guitarist and friend who now plays in a SF band called Peddle. Jan briefly played in the Matchheads from late 1981 through the end of the band (August, 1982). Pat dictated what sounds he wanted and Jan transposed them. Pat didn’t know how to play an instrument but was savvy enough to know what sounds he wanted. It was a matter of searching for the right chords, getting approval from Pat and completing the songs. Pat wrote other brilliant songs during this period including “Wanted Man”, “Top of the Slide”, “Perfect Guy”, “Young Capitalist”, “Standtime”. Jan, Steve and Dan would help out with the transposing/interpreting the desired chord changes. Dan brought in “Who Am I”, “I’m Dragged”, “Broken In Half”, “Modern Way”, and “Inside/Outside”. Pat wrote a lot of the lyrics to “If They Unionize”, “Broken In Half”, “Modern Way” and a verse in “Inside/Outside”. Covers included The Byrds “Why” and the Stooges “Beyond the Law”. The band was confident and cocky but soon found it tough to navigate the very competitive local music scene.

The punk scene changed into speedcore and The Matchheads didn’t fit in musically nor with their image. The Matchheads image was similar to Oasis’; sort of a casual mod look. They thought the “punk look” was lame and generally considered people like that to be “posers”; not really in it for the music or the “cause” (i.e. rock rebellion). The music business being very competitive in nature, was not kind to the band as little interest was generated outside of the band.

The band also suffered through personal changes. Steve and Ross left in late 1981 followed soon after by Mansfield. The band recorded a four-song demo tape with Jeff Rees on bass, Jan on guitar and Lenny Albert on drums. This version of the band never gigged, quickly became demoralized, and was ready to pack it in.

Jeff left to join Fade to Black, an early Goth band. Lenny left to join Silhouette, led by current Guitar Player magazine Editor-in-Chief Mike Molenda. Ross and Mansfield rejoined the band and the band cut a fine demo tape including the following songs: “The Underside”, written by Dan, Jan and Pat, “Ceremony”, written by Dan and Pat, “Japanese Mothers” written by Jan, Pat and Dan, and “Young Capitalist”, written by Pat with some help from Steve. The band played two gigs, a fiasco at The Stone, and a gig at the On Broadway. In August, 1982, The Matchheads broke up due to flagging interest within and without the band. The band’s final gig was recorded (and is now available on CD) and featured many of the previously written songs as well as “East Berlin” written by Pat and Dan. Some of the band members carried on after the break-up. Ross left the music scene and works as a high-tech consultant in the S.F. Bay Area. Steve joined the army, got married, moved to St. Paul, Minneapolis, and fathered two sons. He put out his own CD of Christmas songs in a rockin’ vein in 2000. Tragically, he was struck by cancer and passed away in August, 2001. His passing is still felt deeply by all those who knew and loved him.

Like I mentioned, Dan has set up a Matchheads website and he still has a few copies of the original 7″ for sale as well as a couple of Matchheads CDs. Thanks a lot to Dan for the help and of course for helping create some great music.

Listen to “Pear Harbor” from the record.