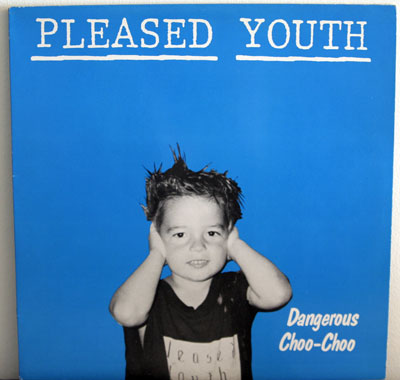 Yes I know, it has been far too long since I’ve done one of these. I always like to try and get some band member involvement in these things and lately band members have been quite sparse. As luck would have it, a former band member posted a comment on this site which enabled me to get in touch with him and that leads us to today’s selection; Pleased Youth.

I first discovered Pleased Youth on the New Jersey’s Got It compilation LP on Buy Our Records. I bought that album because Adrenalin OD were on it and I loved that band. The pleasant result of that purchase was discovering a whole bunch of New Jersey punk bands that I never heard before and I ended up liking nearly the entire album. It wasn’t long after the release of that compilation that Buy Our Records released the one and only record of Pleased Youth, this LP. This LP also has the distinction of being one of the earliest things a label ever sent me to review in my fanzine, Spontaneous Combustion. I couldn’t believe someone would want to send my tiny little fanzine free records to write about at that time. I thought I had hit the lottery. and in many ways I did.

This leads me to the history. I asked Greg Walker to provide a little history on the band so I could do this post and he was kind enough to take some time to accommodate me. What follows is the Pleased Youth story.

The NJ scene of the 1980’s is really divided into two groups. Pleased Youth were part of the central/north Jersey scene along with bands such as Adrenalin O.D. , Bedlam,etc. The other major scene was the shore area/south Jersey scene which focused around the Brighton Bar and Mutha Records in Long Branch. I really don’t know much about that group, so I won’t comment on it.

I remember getting into hardcore when I was about 14 in 1979 and hearing the Dead Kennedys, the Circle Jerks and the Misfits for the first time and being blown away by the power and speed of the music. In NJ at the time the predominant music was Bruce Springsteen, hair metal and cheesy new wave bands. The band started in 1983 when Greg Walker left his band, Bodies in Panic, and met Andy Skovran, a bass player who had just disbanded his group NJF (New Jersey’s Finest) which was one of the area’s first hardcore bands. He started jamming with Andy and other former NJF band-mate Paul Decolator who played guitar. Second guitarist Doug (Sluggo) Vizthum joined the band as well as Adrenalin O.D.’s drummer Dave Scott who took on vocal duties. The name Pleased Youth was chosen as a goof on all the negative “youth” band names at the time (Wasted Youth, Impatient Youth etc.).

This lineup recorded a demo and played mostly in the New Brunswick area, the band’s home base. Due to Dave’s demanding schedule with A.O.D., he was forced to leave the band and was replaced by Keith Hartel. The band played extensively with this lineup in NJ , NY, Philadelphia , Baltimore and Connecticut and eventually recorded an album on Buy Our Records. The band was friendly with the B.O.R. guys and often played shows with other artists on the label. Andy eventually left the group and Keith took over bass as well as vocal duties.

This was the band’s best and tightest lineup. In 1986, Pleased Youth toured the east and Midwest venturing as far as Chicago and playing shows along the way with D.O.A and Toxic Reasons.

The band broke up shortly after this tour due mostly to in-fighting between members. The arguments had been ongoing since the band’s inception and always made for interesting live shows. The arguing often spilled over and involved the audience as Paul and Sluggo were usually feuding with someone.

Where are they now ?
Dave Scott – continued to play with Adrenalin O.D. until their breakup. Eventually moved to Florida where he has drummed for various bands.
Andy Skovran – started an “Oi” band called Niblick Henbane with NJF band-mate Harpo. Played around for quite a few years before eventually calling it quits.
Doug(Sluggo)Vizthum – Started his band Bad Karma playing guitar and singing. Still playing in the New Brunswick area.
Keith Hartel- moved to L.A. where he joined The Nymphs. Moved back to NJ where he played with various bands over the years and is still an actively working musician with his band True Love. Besides creating their own music, his band serves as Richard Lloyd’s (Television) backing band. Keith’s website is Trueloverocks.com
Greg Walker – switched to bass and joined Moby Dick, a heavy drum and bass post-punk band. He later joined an early version of Loose. Greg is not currently playing in order to devote time
to his wife, kids and career as a director of an alternate education program for disaffected teenagers.
Paul Decolator- The true heart and soul of the band. Paul was responsible for bringing many touring bands to NJ and setting up shows as an independent promoter. He also was the author of caustic fanzine Tips n’ Tours. After Pleased Youth he played with G.G. Allin and later with his own band Loose who scored a major record deal only to see it fall apart. Sadly, Paul
passed away in 2002. There is an excellent tribute to Paul at http://www.jerseybeat.com/decolator.htm written by Jim Testa.

Thank you Greg for sharing the Pleased Youth story for this site!