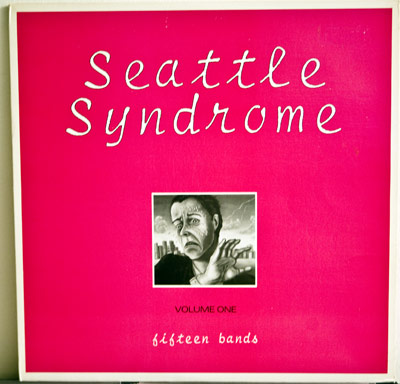 It has been ages since I’ve done one of these and of course when inspiration strikes, it ends up being a record on a label that I know very little about and was unable to find much information on, let alone the person behind it, and the band from this record that inspired me to write I could find exactly zero information on. But that isn’t going to stop me from writing about this record and sharing the song that got me to dust off this feature of this site.

Unlike a lot of my record stories, this one doesn’t start out back when I was a teenager. While all things punk rock tie back to my youth in some form, this is a record I just picked up recently. I was aware of this old Seattle Compilation for quite some time because of one reason; it featured the old hardcore band The Fartz on it. This compilation never found its way into my collection until a few months ago. It’s not that it is super expensive these days, in fact I think it is a very overlooked record, it was just I never got around to acquiring a copy. One day while perusing the old punk records being shilled on ebay, I stumbled across this copy being sold for a very low price and ended up winning it for little more than the cost of a lunch or two.

So it sat on my shelf for awhile and I finally got around to listening to it a couple weeks ago probably while sitting around the house wasting half my day waiting for my girlfriend to not call me. I found the compilation to be a lot different than I originally thought it would be. Instead of being a mostly punk and hardcore compilation it was in fact made up mostly of more new wave type experimental bands. In fact a lot of this stuff on here would have sounded right at home on the Keats Rides a Harley compilation as it was more on the art-punk/wave side of the fence. I ended up really enjoying the record a lot more than I would have if it was full of hardcore and three chord punk bands.

The biggest standout on here was from this unknown (to me anyway) band called The Macs. I have been playing the song over and over any chance I have to put on a record at home and it prompted me to look to see if they recorded anything else. Unfortunately I was unable to turn up any information on the band whatsoever and as far as I know, this could very well be the only song they ever released.

This compilation was released on Engram Records and was the second release on the label. The label only put out about four releases, one of them being a Blackouts EP who for those not in the know featured members that would eventually join Ministry in the late 1980s.  The Blackouts are also featured on this compilation.

The bands featured on this record are as follows: -15, The Pudz, Sutdent Nurse, The Beakers, Jim Basnight, The Fastbacks (one of their earliest recordings that features a young Duff McKagan on drums – he’d later join The Fartz and then Guns n’ Roses), The Refuzors, The Fartz, The 88’s, Blackouts, The Macs, Phillipe Serooge, Savant, Body Falling, and K7ss. I don’t think many of the bands on here released anything outside of their appearance here or if they did, I haven’t heard of most of them.

I believe there was a Seattle Syndrome 2 compilation that was cassette only that came out around the mid 1980s and was the last release on this label.

If you were a member of The Macs, any of the other bands on this record, or were responsible for Engram Records please get in touch so I can update this with whatever information you have to share.