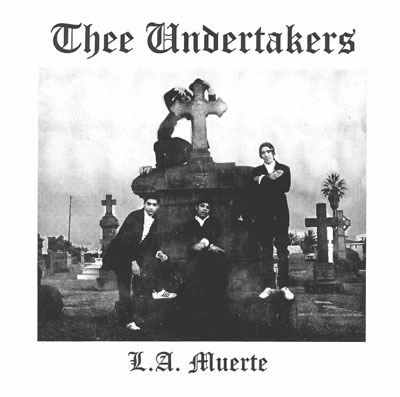 Thee Undertakers were an East Los Angeles punk rock band that existed between 1977 – 1982. In their few years together they recorded a demo and then a full-length LP that was never released (it was scheduled to come out on Tito Larriva’s label at the time, Fatima, but for some reason it never did) and then called it quits, but not before recording a couple songs with a new singer.

The A-side of this single features two songs from their 1982 demo with their new singer. The first track, “Register to Die” is a minimalist lo-fi punk number that certainly seems a little inspired by the Urinals. The song would have fit in nicely on the Keats Rides a Harley compilation as it has a similar sound to the style of punk represented on that record. The second song, “Electric Eye” sounds like a precursor to the OC style of punk rock that bands like Social Distortion, Agent Orange and the Adolescents would make famous. Its a bit harder yet melodic at the same time. Had they put out a record at the time with these songs, I think a lot of punks would have started to take notice of them and their records would likely be exchanging hands for large sums of money these days.

The flipside features two songs recorded live at the Hong Kong Cafe with the original lineup in 1980. The songs are rawer and more 70s punk sounding and the recording quality is pretty average but certainly listenable. It was neat to hear the contrast in the sound of the band that happened in that two year span and with the lineup change. I actually preferred the demo tracks, but that could have more to do with the sound quality than the actual quality of the music.

The black vinyl record comes in a black and white fold-over picture sleeve. It contains a two-sided insert with one side telling a nice little history of the band that was a good education for someone like me who never heard of the band before or even was aware of their existence until receiving this record, and the other side containing some pictures of the band. It’s a nice package overall and it is great to once again see this label dust off some old and very obscure punk rock and preserving it for us old timers and future generations of punk fans to enjoy. I give it a full thumbs up and along with the other single I reviewed on Artifix recently, it will enjoy a lifetime of containment in The Punk Vault.