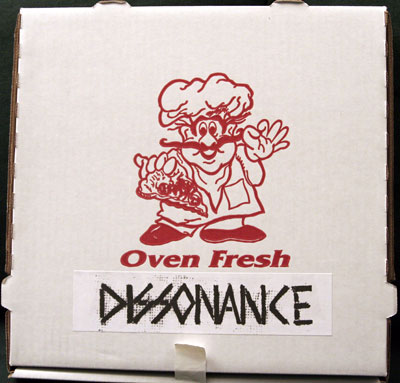 My introduction to the Flint, MI band Dissonance came in the form of a sticker I got back in the 1980s. I don’t know where I got it or who even gave it to me but I had it and I knew they were a band from MI and that was all I knew about them at the time. Soon after, a compilation came out called Another Shot for Bracken on Kevin Seconds’ Positive Force label and it had a song from Dissonance on it. Their song, “Cruise Control”, was the best song on that record and to this day it goes on pretty much any mix tape/CD I make of old punk and hardcore. At the time and ever since, I wanted to hear more from the band. I knew they had a demo tape but I was never able to find someone with a copy and back then I never was able to locate any contact information to get in touch with the band. My quest to hear more of Dissonance’s music seemed like it would never come to an end.

And then something changed!

Turned out the band themselves also felt that it was a crime that their music wasn’t properly documented somewhere and decided to take the task of remedying that into their own hands in true DIY spirit and release this collection of pretty much everything they ever did and then some in a really cool little package.

Over their career of a few years, Dissonance had quite a few lineup changes including replacing their singer about half way through their lifespan. It was the second singer, Andy, who was featured on their one and only vinyl appearance back then. Listening to the two different singers, I feel Andy was much better thand the first guy, Mike. That could be in part to the fact that it was the singer I was familiar with but its safe to say Dissonance were one of the few bands that was able to pull off changing vocalists successfully.

Musically Dissonance were your typical 1980s hardcore band. They never “went metal” which was rare considering their later (and better) recordings were done at a time when the crossover sound was really starting to take off. The songs are all just a couple minutes long each, fast, and powerful which was the perfect fuel for my teenage punk rock years. Twenty years later and this stuff still is more interesting sounding to me than any current hardcore band playing this same style of music. There is just something pure about the bands from back then that doesn’t come across in current bands with the same sound that I can’t describe, its just a feeling I have but I know I’m not alone in this thinking else there wouldn’t be a market for such a collection two decades after these songs were recorded. 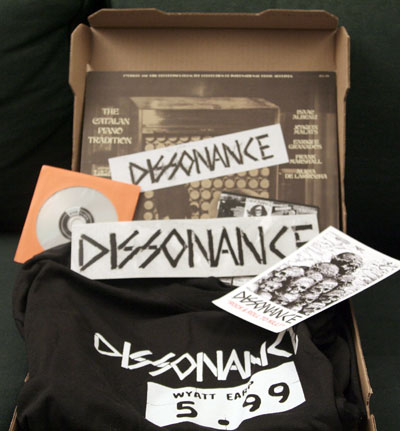 There is two flavors of this box set; a vinyl one and a CD one. I was sent the vinyl one which of course is the superior version. As this is a complete DIY production, the packaging adequately reflects this. The box that everything is housed in is a pizza box with some Dissonance stickers slapped on it. Inside instead of a pizza, you will find a double LP. This 2 record set comes in a cover that is recycled from some old LP. Mine was some sort of classical thing with a gatefold sleeve with a Dissonance sticker adhered to it. The vinyl and labels themselves are not recycled, they simply have the name of the band and a one skull for every number of the side of the LP (one skull for side one, two skulls for two, etc). Thre is a two sided insert with the full track list for each side and the lineup and origin of the recordings. There is also a Dissonance flyer, some stickers, a nice two-sided t-shirt, a postcard and a DVD. Between the two LPs is every demo the band ever did (there were three) , the full recording session that “Cruise Control” was taken from for the aforementioned compilation. There is also a few live tracks on here as well as one song recorded summer of 2006 when the band reunited. The sound quality varies with the first demo having the worst sound quality (still very listenable) and the “Bracken” sessions sounding the best.

The included DVD starts off with a live clip of “Mis-cut Beef” recorded recently during a reunion show featuring the later lineup of the band. The quality of it is very good. It then goes into live footage of the band 20 years earlier! The quality of this is about what you’d expect from a 20 year old video tape shot on a hand-cam. The sound is a bit hissy but you can make everything out and it’s pretty cool that they even had footage that old. From there it cuts to some recent interview footage dealing with the band and punk rock in Flint, MI alternating with more live footage from the reunion show. It is a nicely done little documentary companion to go with the double LP.

For being a handmade item from a band most people probably haven’t heard of before, this package rivals most reissues just on the sheer completion aspect alone. You will have and know everything you need from Dissonance in this package and then some. I for one am ecstatic that their music is finally available for the first time, even though it took two decades for it to happen. I can’t recommend this enough!