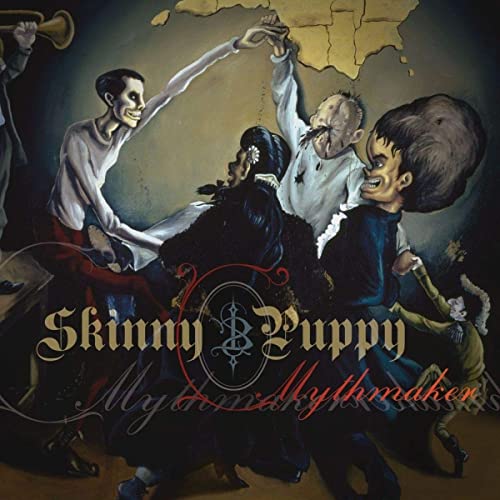 Skinny Puppy has had a very long career full of ups and downs. They were one of the earliest industrial bands in North America and they really paved the way and opened doors for that genre of music to have an audience and a place to play in the 1980s. If it wasn’t for Skinny Puppy you could easily say there never would have been bands like Nine Inch Nails and many other bands like that who enjoyed success thanks to Skinny Puppy opening the door for them. Throughout it all they’ve remained in my eyes the best band ever in the entire world. When the band imploded in 1995 and after the tragic death of key member Dwayne Goettel, it seemed the final nail in the coffin for the band and it was for almost a decade. Solo projects came from both camps of the remaining members but as interesting as they were at times, it just wasn’t the same and fans wanted nothing more than to have Skinny Puppy return. It seemed like a pipe dream until some German promoters threw enough money at the founding members Nivek Ogre and Cevin Key that they couldn’t pass up the opportunity and did a one-off show in Dresden that let to a mending of the fence, and the two decided to start working together again and see what happens.

What happened was The Greater Wrong of the Right, their first album in a decade that was met by myself with a lukewarm reaction. My first impression of that album was it sounded more like an Ohgr album (Nivek Ogre’s solo project with collaborator Mark Walk) than a Skinny Puppy album. It seemed a conscious effort to make a more accessible industrial rock album and it really took a long time to grow on me. It was only after seeing them live that I finally accepted that album as a Skinny Puppy album and in the past two years I’ve grown to really like it despite the fact I still think it pales in comparison to anything they ever did in the past. I attest that to the different dynamic in songwriting as you can’t recreate the magic that Cevin and Dwayne had no matter how much talent you throw in the mix from other people, and another part is the amount of time that has passed. What they didn’t do however was tarnish their legacy, the record itself was very good for what it was.

Now the band returns once more with Mythmaker, their sophomore album since reuniting and it is every bit of a departure from the last album as that one was to their past. My initial impression during the first listen was “this feels more like Skinny Puppy” just by the overall structure of some of the songs and the vocal effects used. Then upon further listens (and believe me if it is possible to wear out a CD with repeat listens I certainly aimed to do just that) I was able to dissect it further and the result is a mixed bag. The songs that do work, work as well if not better than anything they’ve done in the modern day, and the songs that miss just left me hitting the skip button in the CD player. It is not easy sitting down and judging new works by your favorite band. Every time they put out a record I’m afraid that it might be bad, or taint my opinion of them. 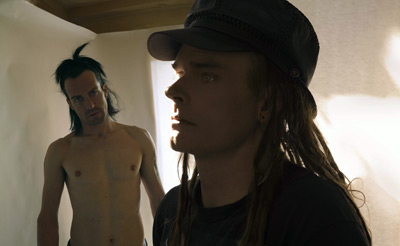 The album opens with “Magnifishit” which is powerful and catchy at the same time due to the repetition. The vocal effects are very reminiscent of the Skinny Puppy of old. In fact the vocals overall on this album sound more like “pure Skinny Puppy” than anything on The Greater Wrong of the Right. Sadly I have no lyric sheet to discern what Ogre is singing about, but despite the numerous vocal effects, most the words are a lot easier to make out than they were in the old days and lines like “I am the answer’s question” certainly invoke some thought as to the meaning.

“daL” is the second track and is tied for my favorite song on the album. This is the song that felt the most like the Skinny Puppy I fell in love with. There is a lot going on in this song with tempo changes and layers of sound, all behind a driving beat that hooks you big time and had me hitting the repeat button on the CD player dozens of times in a row. This should be the song they use as a single to represent the band as it is the epitome of everything that is great about the band.

“haZe”, the third track, would be considered the ballad of the album. It is slow and melancholy. The vocoder effect at the beginning was overused in my opinion but once you get into the thick of the song and it goes away, the song really is good and it is a good representation of how diverse the band can be without making you think they are trying to be a different band.

“pedafly” is probably the most “Ohgr” sounding song on the album. The effects, pacing and vocal sounds sound way more like some outtake from that project and I’d be willing to be that song was mostly Mark Walk/Ogre’s doing. It is still a good song, very loud and in your face, but it also kind of sticks out as almost not matching the sound of the album so far.

“jaHer” (whose idea were these ridiculous song tiles and goofy techno kid spellings anyway?) is another slower number and could be considered another ballad. This one has a very distinct vocal sound that reminds me of the band in the Too Dark Park era. It is another real standout on this album. It is after this point that the album completely shifts gears into a whole different direction.

“politikil” was chosen as what would amount to the band’s single from this album. It is very noisy, repetitive and techno. It almost sounds like it would be a Download song more than a Skinny Puppy song. It didn’t really grab me and I ended up skipping this song on my repeated playing of the album. There is a remix or two out there of this song which I’d be curious to hear though.

“lestiduZ” (again, what the hell does that even mean?!) is another techno based number, a little less on the thickness of the noise but no more entertaining than the last song. This was another one I found myself skipping. 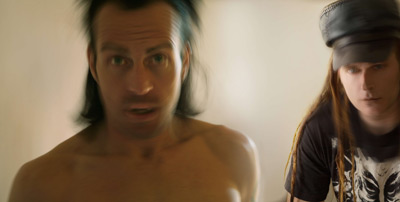 “paturN” is the other song tied for my favorite on the album. The vocals are what drives the song, the perfect example of classic Puppy vocal sound. They are both menacing yet wonderful at the same time and the song is mellow in some places and harder in others. It is easily the most emotion invoking song on the album and is a perfect Skinny Puppy song in every sense. I’ve listened to it on repeat on car rides greater than a half hour long and never wanted to hear anything else. It is also the first song that really sounds like it belongs on something like Too Dark Park or one of the other albums from their past. They channeled into that thing that made them so special in the past with this song and it paid off big time.

“ambiantz” is another song with its base being more on the techno side of the fence but it is layered with keyboard sounds like you’d hear in the early days of the band. The vocal effects are very strange for the band and don’t fit within the mold of the rest of the album for the first part of the song, and then are so buried and distorted in the rest of it that you can’t make them out. Of the three techno tracks on the album, this was the one I liked the most and skipped past the least.

“ugLi” closes the album and is the most aggressive song on the album and in fact the title sums it up pretty good. It’s an ugly song but in the good way. It’s abrasive, it’s repetitive and it’s angry. It also at times reminds me a lot of “Spasmolytic” from the Too Dark Park album with its bass synth and vocal effects. It’s a strong finish to the album and a good nod to the past with its overall structure.

So the end result for me is that Skinny Puppy combat the sophomore jinx with an album that I found to be 60 percent excellent, 30 percent indifferent and 10 percent “meh”. I applaud them for not making another album that sounded like the last, but then again they never did make two albums that sounded the same and that is part of their charm. When things work on this album, they really work and it really feels like Skinny Puppy again. I hope that trend continues in the future and I certainly can’t wait to see how this stuff works live as to this day the band put on the best show you’ll ever see in your life, something they haven’t lost in time. Do I still think they are the greatest band in the world? The answer is a resounding “Hell Yes”.

Litany (the best source for all things releated to Skinny Puppy)