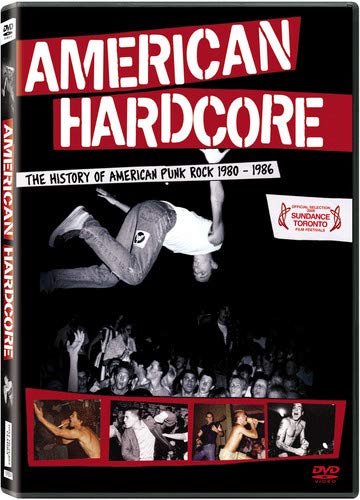 Last year’s documentary based on the book of the same name from a few years ago now finds itself available on DVD. I was actually surprised by how quickly this came to DVD seeing as it was just a few months ago when this movie had a limited theatrical run.

My original review of the theatrical release can be found here so there is no need to re-review the main feature of this DVD. However after watching this a couple more times some things did stand out more to me now than before. There was way too much emphasis on the East Coast bands, especially Boston. I mean SSD was good and all but couldn’t you have cut out some of that stuff to make room for Naked Raygun, The Effigies, Meatmen, Social Distortion, Suicidal Tendencies, Dead Kennedy’s or The Misfits?! These are all household names if the household has any fan of punk rock living in it and were all pretty important bands in the punk rock scene. I also could have done without Phil Anselmo or that dude from Gwar and would have liked instead to have someone who contributed a little more to the punk scene being covered in the film have that screen time instead. The rather narrow focus and glaring omissions aside, I still think the movie is an enjoyable trip back through time.

There is a small handful of special features on this DVD. First and foremost is nearly one hour of deleted scenes. These scenes are all interview scenes that didn’t make the final cut of the film. Some of it was easy to see why it was cut out but there was some stuff that I think should have been included, especially some of the stuff with Lisa Fancher who not only would have represented a female who was a big contributor to the scene mostly dominated by males, but also would have touched on one of the two subjects that was barely given a mention in the movie; the people who started record labels to release this music (the other being fanzines who wrote about the music and scene). Most of the unused interview footage was as interesting as the movie itself and had there been another hour of the stuff included, I would have easily sat through it all without losing interest. The “bonus musical performances” is simply full clips of the live footage used in the film so instead of only getting 20 seconds of it, you can see the entire song. Most of this footage is of low quality as the source material was usually VHS tapes and obviously wasn’t show on pro equipment as 20+ years ago it was uncommon for most people to have video cameras. There is also two live clips of DOA and the Circle Jerks playing at Sundance for the film’s release party. This footage looks great but sounds average at best. A commentary track done by Steven Blush and Paul Rachman rounds out the features and it was somewhat interesting but they got some facts wrong during it (it was Pig Champion from Poison Idea who died, not Jerry A) and there were times when it was obvious they didn’t know what to say and just said something just for the sake of speaking.

The DVD is presented in 1.78:1 anamorphic widescreen. The picture quality varies throughout the film depending on the source of the material. The photo still and most of the modern day interview stuff is sharp and clean but there is some footage that was grainy due to poor lighting and the live footage is mostly very rough and of bootleg tape trader quality. None of this really detracts from the story being presented however. The audio is Dolby 5.0 surround. Three is no subwoofer action nor is it needed as a good 2/3 of the movie is dialog and the other 1/3 is music of varying quality. The main feature run time is 100 minutes and the bonus features total in at close to 90 minutes.

The omissions aside, I still find after a few more viewings that American Hardcore is a good way to spend two hours of your time. If you were there at the time like I was, you probably won’t learn a whole lot that you didn’t already know or live through, but it makes for some nice reminiscing. If you weren’t there at the time, it does give a pretty good glimpse into what it was like “back in the day” and you can get some sort of idea of where us old punks came from.

American Hardcore the DVD on amazon.com

American Hardcore the book on amazon.com