Ages ago I did a “Selections from The Punk Vault” on the first Christ on Parade album – Sounds of Nature. In it I had mentioned that the record had been out of print for close to 20 years and it was a shame such a great hardcore record was unavailable to the masses.  That is until now.

Neurot Recordings has reissued it on CD. But that is not all. Prank Records has reissued it on vinyl. Either flavor contains the original album along with the tracks from Skate Rock Volume 3, as well as the original unreleased version of the “Isn’t Life a Dream” EP with Barrie singing instead of Noah (though I honestly prefer the Noah vocals on those recordings, but it is still really cool to hear and have this version). 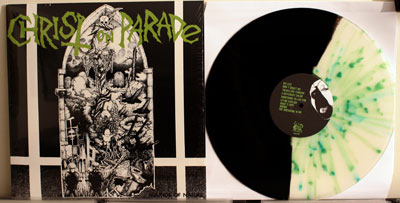 The vinyl also comes in a limited edition colored vinyl version only available through mailorder. It is half black, half clear/green splatter. It also comes with a big insert with all the lyrics and photos of the band. It’s a really great package well worth owning even if you have the original thanks to the extra tracks and the cool color vinyl.