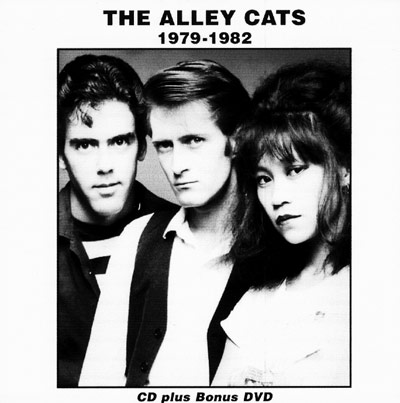 Any old time punk rocker and/or punk record collector will tell you they heard of The Alley Cats. They put out a 7″ on the legendary Dangerhouse Records label, a label that went down in history as releasing nothing but great punk records while the genre was still in its infancy. Every band on that label was unique, The Alley Cats being no exception. After their debut single, they sought greener pastures and released another 7″ on the Time Coast label, as well as a couple of LPs. Aside from the aforementioned singles, I never bothered to pick up anything else they released, thus I missed out on that stuff and never really knew what those records sounded like.  Now I know some of what I missed out on, and I’m sorry it took me so long to find out!

The CD portion of this package contains ten songs, most of which I believe came from their Nightmare City LP. While the music on here was a bit more accessible than their first two singles, it really isn’t that big of a leap in sound, thus the music still has packs a pretty good punch and really sounds like a natural evolution from those early singles, while still retaining enough of that sound to appeal to fans of those singles. I was really surprised by how enjoyable I found the songs on here, I was half expecting this stuff to be really tame and instead I feel like I just unearthed a buried treasure. Why this stuff never became a lot more popular back when it was released is a mystery to me, it is just different enough to be “cool” and just accessible enough that it would have fit in alongside the more popular “new wave” acts of the time.

What you won’t find on here is the Dangerhouse records single (“Nothing Means Nothing Anymore/Gimme a Little Pain”, nor the Time Coast follow up (“Too Much Junk”), why the latter single was omitted is a mystery to me, it was on the same label as this stuff. Perhaps there will be a follow up collection someday that contains the rest of The Alley Cats material.

The bonus DVD contains five promotional type videos of “It Only Hurts the First Time”, “Today”, Night of the Living Dead” (two versions), and “Escape from the Planet Earth”. The footage for all of these videos came from the same source so they tend to look pretty much the same but the quality is excellent and it was really cool to see some early footage of this band to go along with the already great CD.

As a big proponent of old punk rock music getting reissued so the current generation can hear what they missed and old timers can revisit it without shelling out the big bucks, I heartily endorse this nice package and the CD portion of this release is going to be getting repeated listens for quite some time in the immediate future.