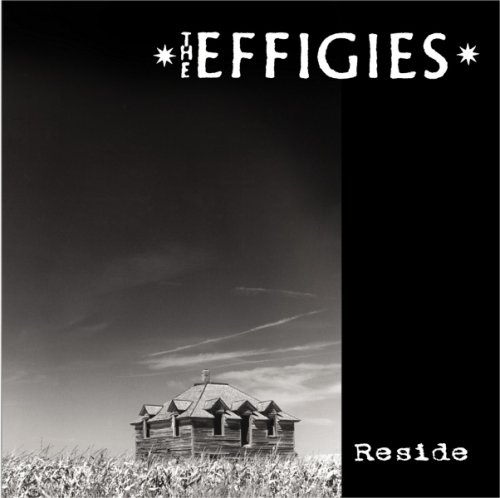 The Effigies were a first generation Chicago punk band who put out a few great records back in the day, and actually had a pretty lengthy career before disbanding. Their later albums weren’t up to par with the earlier punk stuff, but they were still decent records. After a decade or so of being dormant except for a couple reunions in the early 1990’s, The Effigies reformed (with a different guitarist) a few years ago and have been playing shows regularly and wrote new material which has finally been recorded properly and released on their first album in nearly 20 years.

Reside was a long time coming. The band had been playing many of these songs for the past couple years and everyone kept wondering if they were ever going to record this album. I have seen them play many of the songs on here so many times that I think I know them almost as well as the early material and in the live setting those songs really fit well with the old ones and sound like a pretty natural extension.

For the songs on the shiny plastic coaster (sadly there is no vinyl of this) I’m happy to report that the same is true as of the songs live. Reside features ten tracks, most of which if you told me that this was the album that came out after Haunted Town I may believe you. The trademark Effigies sound is in full effect including the guitar sound (changing guitar players did nothing to change their trademark guitar feel) though the music is a little less aggressive and a little more refined. Songs like “The Full Weight of Failure” and “Haz-Mat” are perfect examples of how this band has been able to come back after two decades and make music that continues their great early sound while not sounding retro at all. They may not make songs as fast or hard as “Body Bag” these days but they still pack a punch while maintaining some accessibility.

The album has ten tracks and is a pretty enjoyable listen all the way through without making you want to skip any songs. There’s a couple songs on here where I think they slightly missed the mark and maybe tried to get a little too accessible, but overall there is a lot of solid material on here that stands up to anything they did in the past, and surpasses their last couple albums before they originally broke up. It’s great to see that after a few years of steady playing they finally got into a studio and gave the people a solid record. Here’s hoping it won’t be long before they once again start writing more new songs.

Buy the CD from amazon.com