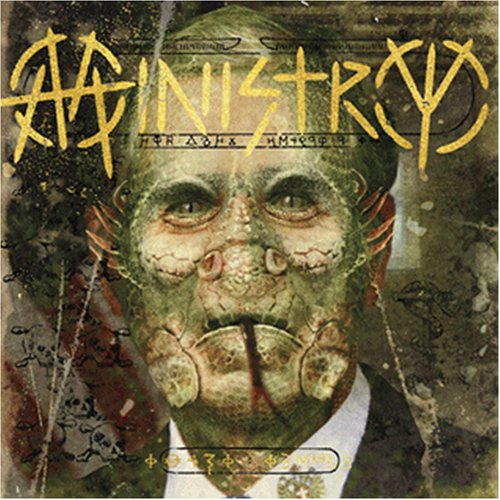 Ministry/Al Jourgensen has had one of the most interesting, unique, and diverse careers in all of music. In the span of more than a quarter century we’ve seen Ministry morph from synth-pop to industrial dance, to industrial rock and metal. In fact starting with the now legendary The Land of Rape and Honey, Ministry pretty much invented a sound that has been influencing a genre of music ever since and the very name Ministry has become a word used to describe a style of music. Ministry has had its share of ups and downs over the years, the last few seeing them once again on the upswing.

This long and diverse path is coming to an end with The Last Sucker, Ministry’s 11th and final studio album. It’s hard to imagine after being a fan for two decades the prospect of this being the last Ministry album and I was hoping when I found out the news that Al would at least go out with a bang. When I heard the last album, Rio Grande Blood, I thought it had a few good songs on it but I also thought quite a few of them sounded the same. I’m happy to report that the final Ministry album doesn’t suffer that fate.

The album starts off with “Let’s Go” which is very reminiscent in feel and in vocal sound to such classics as “Burning Inside”. It is classic Ministry with the vocal style I prefer (kind of higher pitched and aggressive as opposed to the low death metal vocals that Al started using starting on some songs on Psalm 69). It’s nearly five minutes of non-stop energy and aggression after a slow building intro complete with samples. This song reminded me so much of the Ministry I loved in the late 1980s that it was refreshing to hear that Al still had songs like this inside of him. From there it keeps the momentum going with “Watch Yourself” which has a nice blend of the earlier material with the newer more metallic sound. It’s about as happy of a marriage of the Industrial Rock and Metal styles as you could ask for.

“Life is Good” is almost a reverse mix of styles where the metal sound is the prevalent one (with the low guttural vocals) but then the chorus is a throw back to something you’d expect on Psalm 69 or Mind is a Terrible Thing to Taste. From there the album keeps up a pretty steady pace and is the first album in years where the songs don’t start to sound the same throughout the middle of it. In fact I liked nearly every song on this whereas the last handful of albums I’d only like two or three per album.

Time hasn’t softened Uncle Al either, he’s as pissed off with the current state of the U.S. as ever and the lyrics and theme of this album reflect it in a big way. Modern day Ministry albums certainly reflect the times and this is no exception. The fact that there is meaning and thought inducing content in this collection of fine songs just makes it that much more of an enjoyable album. Really the only low point for me was “Roadhouse Blues” which just seemed not to fit with the rest of the album. A fourteen minute epic, “End of Days (parts one and two)” brings this album, and this band to a pretty satisfying end. The end really does set the mood of an end of an era and was the perfect way to finish off the record.

Few bands are ever able to have such a varied and lengthy career and bring themselves out of lulls in their careers long enough to end with such a satisfying finish, but Ministry has always been unconventional and has often times defied logic. The Last Sucker is as strong of a final statement as you’d want to leave on a long legacy and the world is going to be less enjoyable without Ministry in it.

Buy the CD from amazon.com