The last record in the little care package I received from Anarchy Music featured one of the grandfathers of punk rock, one who has influenced generations of punk rockers to this very day. In fact he is still at it and still making music and touring. That man of course is Iggy Pop. 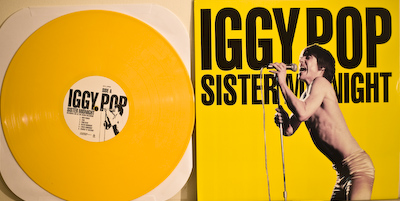 This is a live LP of Iggy Pop that was recorded at the Agora Ballroom in Cleveland, OH (a club I’ve actually been too!) in March of 1977! The album was recorded from the soundboard and the sound quality is very good. On top of the very good sound quality, the performance is even better! The lineup of tracks spans the first two Stooges albums along with the Raw Power album. To make this record even a little more special, this show saw none other than David Bowie playing keyboards! It was certainly a special moment in history and one that someone had the good sense to record.

The record comes housed in a full sleeve, unlike many of the other releases on the label and it also has a bigger press run of 1000 copies all on yellow vinyl. It really is a great record for Iggy Pop fans and an attractive looking record (at least to me it is) and was a nice way to finish up a pretty good stack of records in the package.

The usual vinyl shops should carry the Anarchy Music releases should you want one for yourself before they are gone. A few places that carry them include:

Once again thank you to Anarchy Music for sending this over!