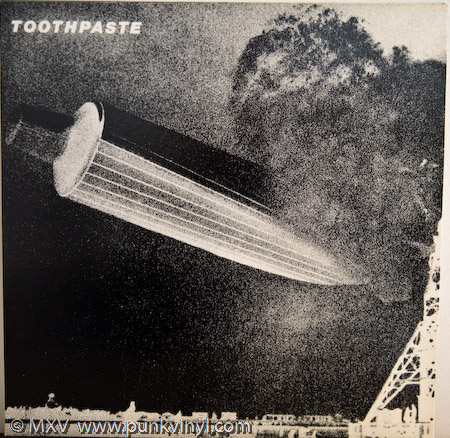 Selections from The Punk Vault [Toothpaste]

Toothpaste were a band from my own city that I really didn’t know anything about until recently. I had heard the name mentioned a couple of times over the years but never gave it much thought. It wasn’t until the end of last year when the band along with Silver Abuse and The Wayouts did a reunion show here in the city that I finally became exposed to their music. It wasn’t even halfway into the first song that I realized I really had missed out on a great band that was right here under my nose and actually were still a band about the time I first discovered punk rock, but I never knew about them or even acquired their 12″.

Luckily I got to make up for lost time by seeing that reunion and as luck would have it, get a copy of their original 12″ for The Punk Vault at the show thanks to a band member having a few copies and bringing them to the show to sell (for the regular price no less!). On top of being a great band, they are also great people and Bob Damrau from the band was kind enough to send me a little band history for this feature.

Over the summer of 1981, John Lundin, Al Szopinski, and yours truly got together and came up with the silly name of Toothpaste because we wanted a generic non-punk name. John had left Naked Raygun, Al had departed from the Way-Outs! and I had quit Silver Abuse all within the span of a couple of months.

We played around Chicago for about a year or so before we went into the studio in November 1982 to record the self-titled EP. We sent copies of the EP (we had 1000 pressed) to just about every independent record company in the country, as well as many college/independent radio stations.

We continued to play around town and eventually coerced Camilo Gonzalez to join our group on bass guitar. (prior to that we had a two-guitarist and one drummer lineup – no bass). Al ultimately left but came back as a vocalist only when we did additional recording sessions, which produced songs as “Sex in Space”, “Opposable Thumb”, and “Freud Taught the Mambo”. One of these sessions also produced the songs that appeared on the Toothpaste 7″ single: “Oh Yeah Come On” (penned by Santiago Durango) and “Kids do the Darnedest Drugs” (one of mine).

Actually, on Dec. 29 2007 (the aforementioned reunion), we performed “Darnedest Drugs” live for the first time ever…

Anyway, John left for film school around 1985-86 and we trudged along for a little while as ‘Devil Luggage’, with Kent Kurzka (ex-Anti-Bodies, among others) replacing John on guitar. (Kent played bass with Toothpaste on Dec. 29).

The 7″ mentioned above is every bit as great at the 12″ and if you ever come across a copy for sale don’t hesitate to pick it up, trust me you’ll be glad you did. Hopefully someday this stuff will get reissued on some sort of CD or at least on iTunes or something.

Thanks to Bob from Toothpaste for taking the time to put together that little history for the site.

Listen to “Palestine” from the record (right click it and save!)