It’s hard to believe that the first Suicidal Tendencies LP is now a quarter-century old. It is also equally hard to believe that I bought this album for myself 24 years ago, and that my punk rock youth was so long ago. I have no idea where the time went, but sometimes it feels like just yesterday that I went to a local record shop (one of the few to carry punk records, and in the import section no less) and picked this album up and sometimes it really does feel like a lifetime ago. Regardless, the fact is that this year marks the 25th Anniversary of Suicidal Tendencies and Frontier Records releasing this punk rock classic.

Suicidal Tendencies is one of those bands that had exactly one great album in them before either drasitcially changing their sound, sucking, or both. In Suicidal’s case, they pretty much went metal after this album and never came anywhere close to recapturing the magic contained on this record. Numerous lineup changes probably contributed to the fact but they did have a pretty lengthy career and found a niche based on metalheads liking them coupled with the reputation of this album and the band’s image.

To celebrate this landmark event, Frontier Records has released a limited edition 25th anniversary edition of their classic LP. 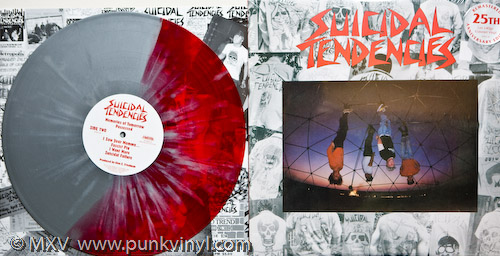 This album was remastered and it comes on half gray/half red with white splatter vinyl. The record also comes inside a printed inner sleeve with flyer scans on one side and the lyrics on the other. I really like how the vinyl color matches with the artwork colors of the cover. Of all the colored vinyl editions thus far, this is absolutely the one you want to own. This is also available on a CD that has also been remastered and has a deluxe booklet for those of you who are fans of that format instead.

As always you can pick this handsome piece of plastic up directly from the Frontier Records website. If you happen to stop by, be sure and tell them that MXV sent you. Many thanks to teh fine ladies at Frontier Records for sending this over.