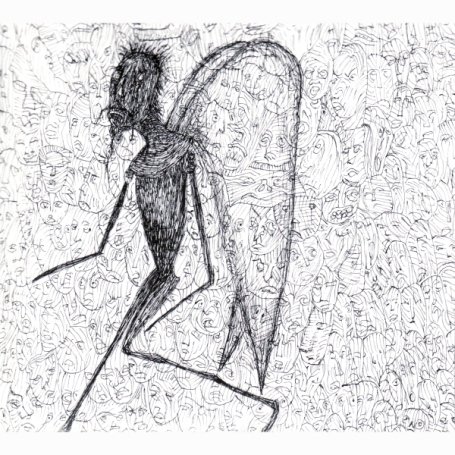 When I was a young punker in the 1980s, I stuck mostly to the North American punk rock and never got super heavy into the British stuff with few exceptions. I remember all the “Crass punks” as I called them also seemed to be into Rudimentary Peni, due in no small part to Crass releasing at least one of the band’s records on their label. I picked up a couple of their records out of curiosity and thought they were pretty good, but didn’t really know much about the band at all.

The one thing I did find interesting over all these years was that the band seems to be in their own little bubble and seemed to avoid every musical trend in the past quarter century of their existence. They miraculously made it through the “metal years” without succumbing to it at all and just kept plugging away sticking with a sound that has worked for them since the beginning. While it could be argued that by doing so they sort of flew more under the radar than they should have, the result is that in 25+ years, the band never sucked, and you can count on their records to deliver what you expect from them.

No More Pain delivers 9 songs of ’77 style British punk rock that sounds exactly how it should and is delivered in two minute or less bite sized chunks. The songs range from mid to fast tempo and have all the punch and energy as their early material, old age hasn’t tamed these guys any. The tenth and final song is an instrumental song which is a cover of a classical music piece from 1680, but obviously done with guitars in the Rudimentary Peni style of sound.

One other thing that stayed consistent was the band’s use of Nick Blinko who has done all the band’s artwork since the start. Included with the CD is a small poster of additional artwork. It’s nice to see that a quarter century later, a band from the old days can still put out enjoyable records without sounding like they are covering themselves. Sometimes change is not for the better, and Rudimentary Peni is living proof of that theory.