What We Do Is Secret 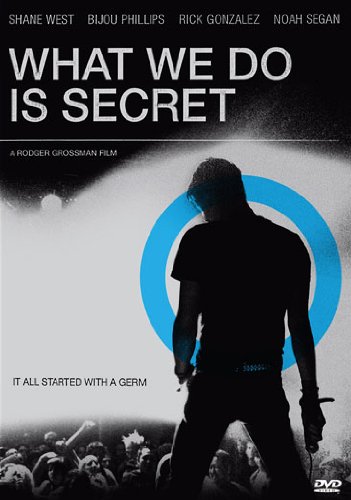 What We Do Is Secret DVD
Peace Arch Home Entertainment

I am a huge Germs fan, in fact The Germs are my favorite punk rock band of all time without question. The band only lasted a few years and put out only one album and a pair of singles in their short time together but since their demise and the suicide of Darby Crash, the band became legendary and their mystique grew and grew. There have been countless stories told about the Germs over the years, a couple of scrapbooks (the History in Cuttings pair of books by Drew Blood), and even a biography. All of these things are but pieces in a puzzle that can’t be solved unless you were there at the time but for those who weren’t, these things are all we have. Those and now this film.

What We Do Is Secret was a labor of love by Rodger Grossman and Michelle Baer Ghaffari (one of Darby’s best friends who was in the kitchen scene with him in The Decline of Western Civilization). It attempts to tell the story of The Germs in 90 minutes when really it would probably take more than 900 to really dig deep into all the mystique and legend that band had in their short life.

The film starts off with a very brief history of Darby Crash’s childhood that leads to the meeting of Darby and Pat Smear at the alternative school they both attended. They quickly jump to Darby’s idea to start a band, their search for members and their first show. All of these things take place in sets that look to be faithfully reproduced based on photos I’ve seen over the years and watching certain scenes in this movie really was like these photos and old stories coming to life right there on my TV screen.

As the movie progresses it touches on how they met Chris Ashford who became their manager and put out their first single, how they came to the Masque, their various shows that got them banned from every club, their non stop need for a drummer until Don Bolles drove out from Phoenix to audition in the bathroom of The Masque, Darby’s descent into heroin and depression and what led to the demise of the band and of course Darby eventually making the decision to end his own life.

The film works on some levels and it also falls short on some as well. Some things were inaccurate or completely overlooked such as their first encounter with the then-new Slash Records was in the form of the Lexicon Devil 7″ and not the (GI) LP. There could have been a better telling of the story of Darby and Robbie and just how much drugs became a part of Darby’s life. What was probably largely attributed to a lack of budget and time, many things in the movie weren’t covered with any kind of depth and the film felt like it told the cliff notes story of The Germs instead of being the definitive story. There were countless scenes that I wish were longer and that told more story. In some cases things seemed condensed where they sort of blended two stories into a single scene in order to try and cover as much ground in as little time as possible, again probably a result of their having no real budget or money to make this film.

It’s not all bad, in fact there is quite a bit of good in this movie as well. I thought Shane West did as good a job of playing Darby as anyone probably could have, right down to having work done on his teeth to look as much like Darby’s as possible. The man really seemed to do his homework because he had a lot of the mannerisms down based on various video footage I’ve seen of the band and he did an admirable job trying to play a man that has become larger than life in punk lore. The rest of the cast was also impressive as well and they all did a pretty believable job of being these characters.

The film also did a good job of mixing up comedy with emotion. Scenes with Kickboy Face and Brendan Mullen will have you laughing out loud and then scenes with Darby showing up at Oki Dogs to find the place empty and the ending where he takes his own life will bum you out. The sets and look of the film were very well done and looked very authentic for the time period with only a couple things standing out as being incorrect such as showing a CH3 button on a leather jacket as that band started after The Germs were history.

The only bonus items on the DVD are the theatrical trailer and a commentary track done by Shane West and Rodger Grossman. In the commentary track they often talk about how many of the shots were done sans-permits and how they had no money, no budget, and had to do everything in three takes or less then quickly pack up and hit the road. It would appear that this film about punk rock kept true by necessity to the DIY spirit.

I think it is pretty amazing a film like this was ever made. The Germs are not a household name so automatically they were catering to a pretty niche market by making this film. The fact it took so many years and was done on so little money is pretty impressive. While the film may not contain the depth of information a punk historian would like, it does a decent job it presenting the high-level story of one of the best punk rock bands in history with minimal adding of the “Hollywood Treatment”  and is a pretty good way to spend 90 minutes of your time.

What We Do Is Secret myspace page