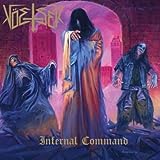 Despite their band name making me think they are some sort of old Finnish hardcore band, Vöetsek hail from San Francisco, CA and have been around for five years. The band has had a handful of releases but this is only their second full length album. Though I’ve seen the name mentioned in the past, this is my first time hearing the band’s music.

Vöetsek take the thrashy sound of bands like Spazz and they metal it up a bit with that late 80’s crossover sound. The vocals shriek and scream and are largely unintelligible. Despite the metal stylings of the guitar work at times, the songs rarely even hit the two minute mark. Vöetsek’s songs are really short, really fast, and really hard. They never slow down for more than a few seconds or seem to stray from their formula which results in many of the songs sounding similar and the album comes off at 17 short intense rapid fire attacks. I found it interesting in short doses (and their songs are short so it makes sense) but think this is the kind of band that was designed for 7″ vinyl releases where you get a bite sized dose that fills you up just fine. I do like how they incorporated the metal style into their thrash without making them sound like a full on metal band, I just wish they’d have provided a bit more variety among the songs.

Self Made God Records