The Accused – The Return of Martha 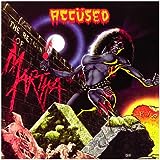 The Accused – The Return of Martha CD
Unrest Records

This was the third release for The Accused and I think it originally was released by the long defunct Combat Records who are the time were one of the biggest “crossover” metal labels around.

The music on this disc is very similar to the album that preceeded it, but the sound is a bit heavier than the last one. I think they tried to add a bigger feeling of power by thickening up the sound, but the result is the entire album has a bit of a muddy or muffled quality about it. Their “splatter rock” sound was as good as ever but the recording quality (or perhaps just the way it was mixed) was just poor.

I think this was also the last Accused record I ever heard, I’m not even sure if they did anything after this one as at the time I had stopped following them shortly after this was released.  After being out of print for nearly two decades, it’s nice to see someone cared enough to reissue this album and I got to revsit it (my original copy which I think was sent to me on cassette was long gone). If you were a fan of this band, or that of the mid 1980s “crossover” sound, despite the poor mixing job this is still a pretty damn good album and worth checking out.