Channel 3 – One More For All My True Friends 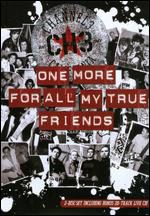 If you think back to all the punk rock bands of the early 1980s who either broke up, went metal, went pop, or generally just started sucking and then breaking up, it’s pretty amazing that more than 25 years later Channel 3 are still around. Sure they fell prey to one of the above scenarios for awhile, then actually did call it quits for a bit only to come back to their roots and redeem themselves in the eyes of their fans. Few bands were able to pull that off.

The band was based on a life-long friendship and if you ever get a chance to meet the two nicest guys in punk rock, Mike Magrann and Kimm Gardner, it will become instantly apparent to you that these guys and their band is about friendship first and foremost. It is that foundation which was made them so good in the first place.

One More For All My True Friends is a documentary on the history of Channel 3. The documentary starts out covering how Mike and Kimm became friends and how that friendship grew to their discovery of punk rock and their idea to start a band. It is told through modern day interviews with nearly everyone who did time in the band over the years with the Mike and Kimm interviews doing the majority of the story telling. The footage is sewn together with live clips of a recent live show at Alex’s Bar in Long Beach where many of Channel 3’s past alumni participated on stage playing various songs from their back catalog. There is also plenty of old photos, fliers, and even some old live footage thrown in to help drive the story.

What’s so great about this story is you won’t find any former band members bad mouthing each other and there was no bad blood anywhere. Equally refreshing is how the band pulled no punches when they covered the “metal years”. They openly admit to the reasoning behind changing their look and sound and what it ended up costing them. That kind of honesty is pretty rare and just made the story that much better. They cover every record and how it got made along with what was going on behind the scenes at the time. It is a fascinating tale from start to finish.

On top of the interesting story, the live footage is great too and it captured a great performance by the band which was also rare in the fact that so many former band members took part in it. That’s another thing you don’t see every day! The documentary runs and hour and twenty minutes which literally felt like it was over in the blink of an eye. The DVD also has bonus material consisting of the Target Video footage that was recorded early in their career (and something I’d never seen before) along with the full live set that was used as part of the documentary. There is also a CD with the live show on it as well which rounds out an already great package.

As a long time fan of Channel 3 I was thrilled that someone decided to do a documentary on a band that somehow weathered all the good and bad times and at the end of the day is in the same place as when they started, good friends playing music together. If you are a fan of the band then picking this up is mandatory.