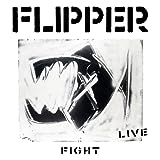 Flipper was one of the earliest San Francisco punk rock bands and practically invented the genre of “noise rock”. While most bands of the time were playing faster, harder and shorter songs, Flipper played slower, noisier, and longer than just about everyone. Many people didn’t really get it and thought Flipper were perhaps the worst band in punk rock (which if you ask me the actual worst band in punk was The Exploited) and just dismissed them as a joke. The band was definitely an acquired taste and it took awhile before I “got it” when I was a teenage punker, but as I got a little older I finally understood the charm.

To celebrate the band’s 30th anniversary, they have decided to release a new studio album (their first in 14 years) and a new live album (their first in probably 20 years). This album, Fight, is the live one. This album was recorded over the span of two shows in 2007 with 3/4 of the original members and Krist Novoselic (some may remember him from some obscure band called Nirvana) taking over the bass duties of the late Will Shatter who died of a heroin overdose in 1987.

The album contains nine songs, five of them Flipper classics and the other four brand new songs, the first new Flipper songs in well over a decade. If you don’t pay attention to the track listing, you’d be hard pressed to pick out the new material from the old, it all just sounds like the Flipper you either know and love, or know and hate. The songs are mostly long, slow, and plodding and the music sounds as abrasive and dirgey as it did three decades ago.

The sound quality ranks very high on the list of live albums I’ve heard in my life. The mix is very good, though a little light on the guitars and the vocals sound great with just the right amount of volume, which is a nice change from the usual vocal-heavy mixes on live albums. The performance was very solid too and it is proof that even in old age Flipper still have that spark that made them what they were back in the day.

If you are a die-hard Flipper fan you will definitely want to add this to your collection and you’ll find yourself playing it regularly. The new songs make me curious about the new studio album (which I’ll be reviewing next) and I hope they take this act on the road and make it to Chicago sometime before calling it quits again.