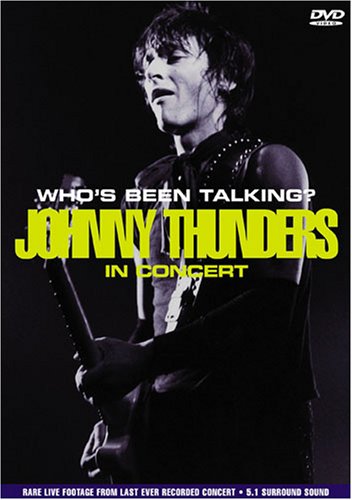 Johnny Thunders lived too short of a life but left behind one hell of a musical legacy before his untimely death. Between his time in the New York Dolls and then later with The Heartbreakers, the man was a goldmine of great music. His contribution to music definitely inspired countless bands and musical genres and if it wasn’t for people like him, you wouldn’t be reading this site right now.

Who’s Been Talking? is a live video of Johnny Thunders’ last ever recorded concert. I believe this concert took place a few weeks before Johnny’s untimely passing and was recorded in Osaka Japan in front of a very large and enthusiastic audience.

Despite looking a little frail, Johnny was completely sober for this performance and appeared to be in very good spirits throughout the entire 99 minute performance. He played stuff ranging from his entire career, though I was a little disappointed that he omitted “Chinese Rocks” as it was my favorite song of his. On top of his own material he also did a couple of cover songs as well. There’s a full band backing him up as well as some additional female singers. The performance was really well done and very professional.

The video was shot on multiple cameras in full frame and despite being a little bit fuzzy (probably a combination of age and whatever ancient technology the thing was shot on) it is still mostly very good. The sound which is in 5.1 Surround was excellent, in fact it would make for a really good live audio-only release on a CD or LP. It was rather fortunate this show was recorded as it turned out to be his last and it was a pretty nice send off that die-hard Johnny Thunders fans will definitely want in their collections.