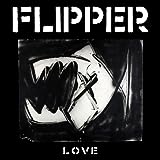 I can’t believe it has now been 30 years since the band Flipper started, which means I’m really starting to get up there in age! Of course it also means so are they as the members of Flipper all have about ten years on me but they don’t seem to let age slow them down as they are still at it, albeit after a 15 year hiatus from recording new material.

After reforming a couple years ago with Nirvana’s Krist Novoselic taking over the bass duties of the late Will Shatter and playing sporadic shows, the band finally sat down and wrote some new material. Love features ten new Flipper tunes that mostly prove the old men still have it, even though time has softened them up just a bit.

The sound of this album is a bit less abrasive than any previous Flipper albums (though admittedly I never heard the last one they did for American Recordings) and this is easily their most accessible album, however it still maintains enough of that classic Flipper feel to feel authentic. The songs are a bit on the long side, they are mid-tempo and dirgey. The rhythm section seems the most prominent in the mix, especially the bass and the whole thing has a dirty and gritty underlying tone. The vocals are still angry and honestly if you told me this was an early 1990s Sub Pop record I would believe you. It comes as no surprise that it has that feel since Jack Endino was the one who recorded this and he was at the helm for all those great old Sub Pop singles.

There’s not a whole lot of diversity in the sound between the different songs but Flipper songs always had a similar feel to me before so that’s nothing new. Overall this was a really good listen from start to finish and a lot more digestible than some of their early work (though once you acquired the taste for Flipper you understand the magic of those early albums and singles) and is a very good addition to the Flipper catalog. Not a bad comeback after nearly 15 years of lying dormant!