The Accused – The Curse of Martha Splatterhead 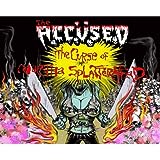 In the mid to late 1980s, The Accused were one of the premier “crossover” bands and probably played a large part in forming that style of music that became so popular back then, and later went on to influence such genres as grindcore. Their spin on the metal/punk fusion was unlike any other at the time and they dubbed their sound “splatter rock”. They put out a few albums back then that are now considered classics and genre defining. Eventually the band split in the early 1990s and reformed in 2003 for a brief time before 3/4 of the band left guitarist/founding member Tommy Niemeyer on his own as they formed a new band, Toe Tag.

After a break that lasted a few years, Tommy recruited replacement musicians and decided to continue on still using the name The Accused. He stands as the only original member left and historically only one member that isn’t the singer, whose sound was such an identifiable feature,  carrying on the band usually nets bad results (see Jerry Only’s version of “The Misfits” as an example). I was quite skeptical at the though of this new version of The Accused but when I found out they got signed to Southern Lord I became very curious to hear them because that label as some really good taste in bands.

Upon the first song starting, some of the sound had a familiar feel to it like The Accused I remembered. The new vocalist has a sound pretty similar to Blaine’s but not quite and screeching. The songs were pretty short, most clocking in under three minutes and while they were fast, they felt a bit less chaotic than early Accused material and the riffs sounded more deliberate and less like random chainsaw cuts. The music is still generally fast and heavy with some tempo changes in there and the vocals are hard, angry and powerful. This new guy while no Blaine certainly got the job done and if I just listened to the album with a clear mind not trying to compare it to the past, overall is is a pretty solid metalcore album with some satisfying riffs and one that packs a wallop.

While I will miss The Accused of old, I’m happy to report this new version taken with the mindset that it is just a whole new band did an admirable job of delivering the goods and was a pretty nice surprise.

The Accused on myspace