Let Them Know: The Story of Youth Brigade and BYO 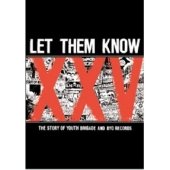 Let Them Know: The Story of Youth Brigade and BYO Records
BYO Records

It’s amazing to think that BYO Records has been around for a quarter century now. When I was a teenage punk rocker in the 1980s, BYO was one of those labels I was buying everything on because they were putting out some of the best records of the time. They had an all star lineup of punk rock legends such as 7 Seconds, SNFU, Agression, and of course Youth Brigade. They also put out one of the best punk rock compilations of the time, Someone Got Their Head Kicked In which still sells steadily 25 years after it’s release and has never gone out of print!

The story of Youth Brigade is an equally fascinating one. Here was this great punk rock band that consisted solely of three brothers, a gimmick that Hanson would make famous about two decades later.  These three brothers were more involved in the punk rock scene in more ways that most people. They booked shows, they released records, and they played in a band.  Their contribution and influence on the world of punk rock back in the early 1980s can’t be denied and the scene wouldn’t have been nearly as good if the Stern brothers never found punk rock.

Let Them Know tells the story of the Stern Brothers, their band Youth Brigade, and their label the Better Youth Organization. Their story is pretty unique in the world of not only punk rock but music in general and after a quarter century it was about time someone decided to tell the story in a full length documentary. The story starts out with how the Stern brothers went from surfing to discovering punk rock and the first band that two of them played in, The Extremes. From there they dive into the beginning of Youth Brigade, and the release of the first BYO record, Someone Got Their Head Kicked In. They touch briefly on the original version of Sound and Fury and how they scrapped it and re-recorded it and then proceeded to tell the story of how they released records by Agression, 7 Seconds and SNFU.

They also talked about the club the BYO used to run shows at called Godzilla’s, the state of punk rock shows and the violence surrounding them, how the scene and the bands changed or broke up as they approached the middle to late 1980s and where things went from there. Where it went was into a bit of a hiatus before things picked up again for the label and then Youth Brigade decided to start playing again after two Sterns got kicked out of the swing band they started! Throughout the whole film it was great to see that the Stern brothers never lost sight of their goals or their positive attitudes and 25 years later, they still stick to their beliefs and are trying to make their little piece of the world a better place and have set a good example for many bands and labels who have followed down the path they forged.

The film’s story is told through interviews with not only the Sterns but lots of band members and people who were involved in the scene at the time, including the guy who gave the slam dancing lesson in Another State of Mind! These interviews are weaved together with tons of great photos and some live footage from the old days. The video is full frame and the sound is straight stereo, nothing fancy about either but the picture quality is solid and the sound mix was excellent which meant no reaching for the remote to adjust the volume during various scenes.

The film runs 83 minutes and if I had a complaint about it, it would be that I wanted it to be longer because it was such an interesting story. There is about 30 minutes of bonus material consisting of additional interviews and outtakes which compliment the film nicely and give you even more insight into the world of BYO and it’s fascinating history.

The DVD is packaged with a compilation that contains 31 bands doing covers of various bands/songs from the BYO catalog. It features lots of great bands both old and new including 7 Seconds, NOFX, Pennywise, Off With Their Heads, Youth Brigade, Dropkick Murphys, Subhumans, CH3, Leatherface, and tons more. While the idea is a novel one, I think I’d have preferred a compilation of unreleased tracks from the BYO bands past and present instead of a full disc of covers.

There exists two choices of packaging for this release: DVD/2xLP or DVD/CD. Both come with a book that contains pictures and stories about BYO. Unfortunately my review copy didn’t contain a book so I am unable to comment on it. Overall Let Them Know is not only a great documentary but it comes in a great package that is absolutely worthy of the price tag in either format. If you own even just one release on BYO, you owe it to yourself to pick this up and learn the history of this great label and this family of punk rock pioneers.