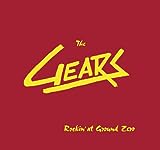 The Gears were a surf punk band from the Los Angeles area who were around during the first wave of punk rock to emerge out of Southern California. They put out a 7″ and an album and then broke up. Their records went out of print quickly back then so for years they weren’t available anywhere until the LP was reissued for a short period of time over a decade ago.

Well this legendary but rather overlooked by the masses punk band as finally had the entirety of its recorded works reissued in one convenient package. Rockin’ At Ground Zero contains the full length album of the same name along with the original three song Let’s Go to the Beach 7″ EP. On top of that, this disc contains five never before released demo songs from a tape that was recently found, four of which later ended up being recorded for the LP and one that has never been heard before this release!

The music of The Gears is 1970s mid-tempo punk rock with some surf and even a little bit of rockabilly bits in some songs. The songs are punchy but you can sing along to them and the choruses, especially in songs like “Let’s Go to the Beach,” are infectious and you’ll be singing along to them by the second time around in any particular song. Their songs are short and to the point and every single one of them is a good listen, they didn’t stick around long enough to have any filler and certainly didn’t waste any space on their only two releases.

This deluxe edition of the album is packaged with a second CD from Axxel G. Reese’s post-Gears band, The D.I.s (not to be confused with D.I., the Casey Royer led band that spawned out of the Adolescents). The band had a longer life than The Gears but was less prolific, recording a bunch of songs but only releasing one 12″ EP (which I actually would like a copy of).

The music of The D.I.s is a mix of punk, rockabilly, blues, and good old fashioned rock and roll. You can kind of hear how had the Gears stayed together they could very well have evolved into this style of music. They were pretty ahead of their time as now this style of music has become much more popular than it was over 20 years ago when The D.I.’s were around. The disc contains 22 songs and is a pretty solid listen from start to finish and if these guys were around now, they’d probably be quite popular.

This deluxe package contains two CDs in full digipak packaging with full artwork. Each disc contains a small poster with photos and flyers and while The Gears disc barely contains any liner notes at all, The D.I.s disc had much more useful and informative liner notes. The lack of lyrics or any real liner notes is my only complaint about the whole thing. The Gears material was remastered and sounds better than any of the previous issues and The D.I.s stuff sounds equally fantastic.

Considering the quality of both bands, I can’t see any reason why anyone interested in The Gears album wouldn’t pick up this deluxe edition, the second disc is well worth the extra cost and overall this reissue package was really well done and certainly worth picking up for new fans as well as old ones who may own the previous edition of Rockin’ At Ground Zero.

Buy the album from

The Gears on myspace