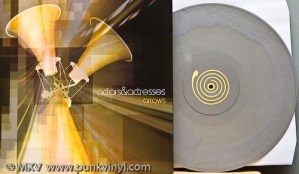 The Mylene Sheath has been on a roll lately putting out quality releases and instead of stopping to catch their breath, they have kicked it up a notch and are keeping the momentum going with a whole bunch of new releases. The first one being from a relatively new band called Actors and Actresses. Until this record came in my mailbox I had never heard of this band before, but apparently this is their first full length record, having only released an EP prior to this one.

Actors and Actresses play mid to slow tempo indie rock. The songs have layered guitars peppered with ambient sounds that help set the mood and melodic vocals. There’s hints of a shoegaze influence in some of the guitar parts in the songs and the songs are equally catchy and soothing at the same time. The music is really quite mellow overall but it’s the  intricate song structures that make them stand far above the hundreds of indie rock bands out there today. I found it a really nice change of pace from the usually very aggressive music I typically play and was surprised by how often I reached for this record in the stack of records I have to listen to for repeated listens. It also makes me want to pick up their previous EP to see what I’ve missed thus far from the band.

True to form for the label, the packaging for this record is top notch. The record comes housed in a full color gatefold sleeve. The record comes on gray and clear swirled vinyl which is limited to 300 copies. There also exists a mail order exclusive edition of 100 on gold vinyl. The record also comes with a sticker and a coupon code for a free digital download of the entire album! This addition of the download code is a wonderful addition to the label’s already great packaging because now you get the best of both worlds with a beautifully packaged vinyl record to play at home and the mp3s to put on your iPod for when you are on the road. More labels should adopt this trend if you ask me!

Actors and Actresses turned out to be a wonderful discovery for the labelm and for myself now that I’ve heard them and not only will this album be receiving continued plays around here, but I look forward to future material from these guys.

Buy the album on iTunes