Constants – The Foundation, The Machine, The Ascension 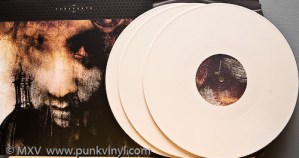 Constants – The Foundation, The Machine, The Ascension LP
The Mylene Sheath

For a label that at the beginning was only putting out records by instrumental post-rock bands, they sure have expanded quickly and in a big way to include bands with actual vocals and much like their taste in instrumental bands, The Mylene Sheath’s taste in traditional bands is just as good.

Much like the last release I reviewed, Constants is another band that is new to me and turns out they had a couple of releases out prior to this one. Constants take the foundation of a modern day post-rock instrumental band and adds the element of vocals to it, making for a good answer to the question of “what would it be like if someone sang to this kind of music?”

The instrumentation leads the pace and sets the tone for each song. Layered guitars, occasional electronics, occasional repetition, and building  intensity are the ingredients to these complex songs that are equal parts emotional, driving, and diverse. The vocals are melodic and almost atmospheric at times, which comes across as another layer to the intricate songs. It’s easy to focus on one aspect of any given song and enjoy just that part of the song, then on the next listen find another layer to latch on to,  which makes listening to this record feel like you have a constantly evolving sense of discovery. The music is far from simple, which means it won’t be something you’ll grow tired of quickly by any stretch of the imagination.

The packaging of this record is the label’s most ambitious yet. The record is housed in a triple gatefold sleeve and the album is pressed on three colored vinyl discs. It also comes with two stickers and a coupon with a code to download mp3s of the album! The full color artwork looks stunning on such a large sized package and the entire thing is top quality from cover to cover, disc to disc. It comes on cream colored vinyl limited to 300 copies and there is also a mail order exclusive edition of 100 on brown/gray/clear vinyl.

This album will easily be making my list of best releases of 2009, everything from the music to the packaging is wonderful and is well worth picking up for just about anyone.

Buy the album on

(for those of you who are don’t buy vinyl)