Channel Three – To Whom it May Concern 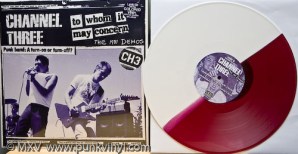 Channel Three – To Whom it May Concern LP
TKO Records

Channel Three (or CH3 for short) has been around for well over 25 years now and amazingly are still alive and well and even still making good music which is pretty rare in the world of punk rock. Sure there was a time that they “went metal” but who didn’t back in the late 1980’s? That speed bump aside, the band left a legacy of fine punk rock behind them and the world of punk rock was better off for this group that started on a friendship having formed.

When people think of CH3, the main things they think about is their three records on the legendary Posh Boy label, which were the first releases for the band. The first two are viewed as punk rock classics these days and contained the band’s best material hands down. I pretty much wore through them playing the song “Manzanar” over and over when I was a teenager and had to replace them with unworn copies at one point! Did you ever wonder what the band sounded like before they recorded those Posh Boy records? Well I know I did and now thanks to someone having the good sense to save a tape of the band’s first experience in a studio recording some demos in 1981!

To Whom it May concern features thirteen tracks recorded over two different sessions way back in the summer of 1981. It contains the first recorded versions of such great songs as “Mannequin”, “You Make Me Feel Cheap”, “Manzanar”, and “I’ve Got a Gun” among others and really is a wonderful artifact.Playing this record is like going back in a time machine!

The songs are a lot rawer than what the “official” versions ended up being and they sound great. Some of the arrangements are a bit different too and it is really neat to see this snapshot in time and how the songs evolved from this recording to what the finished products were on the Posh Boy releases. They discovered punk rock gold with this tape and had the thing come out back when it was recorded, I have no doubt in my mind the band would have still easily been as popular as they ended up being. For being their first time in a studio, they sounded really good and this thing is a great listen from start to finish.

The LP contains some nice liner notes on the back cover from Mike Magrann which gives a little history on the recording and the band itself. The LP is pressed on half purple/half white vinyl and it even comes with the CD version of the album inside so you can make your own mp3s of it for your iPod! It’s a great package overall and a damn fine service to old punk fans that they made these recordings available. Fans of Channel Three need to have this in their collection, as well as any fans of early SoCal punk rock in general. TKO Records should be commended for a job well done on this one!