Gifts from Enola – From Fathoms 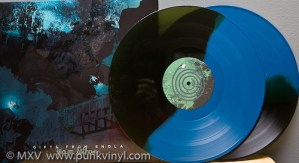 Gifts From Enola – From Fathoms
The Mylene Sheath

When The Mylene Sheath released a record last year from Gifts From Enola, I was duly impressed and looked forward to more from the band. I got my wish in the form of a brand new full-length album titled From Fathoms.

For their second full-length, Gifts From Enola picks right up where it left off with their last one and keeps the momentum going. The band craft somewhat lengthy post-rock instrumental songs filled with complex rhythms, heavy riffs, quiet passages, and plenty of mood inducing emotional shifts. Each song sounds completely different from the previous and it is like each one is a self contained story with no words. The real standout for me is the song, “Trieste” which is an eleven minute epic with a bunch of different tempo changes and some powerful parts that make the song feel like a mini-movie.

The album contains eight songs and is a great listen from beginning to end. The pacing of the album was really well done with lots of ups and downs, an instrumental roller coaster if you will. On top of the standard instruments, there is the addition of some ambient sounds, vocal samples, and even some cello. It is every bit as good as their previous effort, if not better and after listening to this a huge handful of times, it still left me wanting even more from this band and hopefully they’ll continue to deliver such fine albums on a regular basis. Now I just need to catch them live someday!

True to the label’s reputation, the packaging on this release is top-notch. The record comes in a full color gatefold sleeve and the record is pressed on two colored vinyl discs. The records are half opaque blue, half translucent green, and limited to only 300 copies. The record also comes with a code to download the mp3s of the album for free which is something I hope the label continues to do for all future releases, it also came with a sticker.

Gifts From Enola managed to avoid the sophomore jinx by releasing an amazing follow up to their amazing debut and I hope things continue from here as they’ve easily reached the upper echelon of their genre with this release.

Gifts From Enola on myspace

Buy the album from iTunes (for those without a turntable)