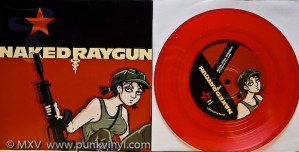 Naked Raygun are legends in the city of Chicago and some even view the band as super heroes! The story of this legendary band has been told in a documentary or two and I’ve written about them countless times on this site since they decided to reunite.

When the band got back together, the question on everyone’s minds was “Will the band record new material?”, and for awhile the answer was unknown. Then, word started trickling out that the band was writing new songs, and then they started playing new songs at some of their recent gigs so the thought of a new Naked Raygun record seemed like a plausible one, and now it has finally come to fruition and on the superior format!

This single features two new songs and is the first of a planned series of singles. “Mein Iron Maiden” is a short catchy number in the true Naked Raygun style complete with “whoa ohh ohhs” and punchy guitars. It sounds like something that could easily have gone on the Understand album and is a vast improvement to anything the band did on their last studio LP, Raygun Naked Raygun. “Out of Your Mind” is a longer number that starts off quite slow and mellow and then part way through kicks into high gear with a really melodic and catchy chorus that is sure to become a sing-a-long favorite at future shows. About two minutes into the song it changes gears again and sounds like a completely different song, as if this was really two songs glued together into one. While not as good as the first song, it is still a pretty strong number, especially in the middle, and warrants repeated listens.

The single comes in a full color picture sleeve with cool artwork on the front. It is pressed on red vinyl and also comes with a download card so you can get the mp3s of the record for your iPod or computer. Sadly there was no lyric sheet but the lyrics are pretty easy to decipher in the songs.

It’s great to see such a revered band come back and release some new material that keeps their legacy going and proves the long time they were away from being this band didn’t hinder their ability to write some fine music.