If These Trees Could Talk – Above the Earth, Below the Sky 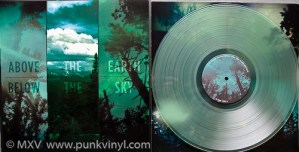 If These Trees Could Talk – Above the Earth, Below the Sky LP
The Mylene Sheath

When The Mylene Sheath sent me their first batch of releases a couple of years ago, I totally fell in love with the first album by If These Trees Could Talk.  In a genre that saw a sudden explosion of bands, this little band from Akron, OH whom I never heard of before suddenly appeared and bested most of the bands playing their style of music who have been around longer or were even pioneers of the genre! There was something special about them and the band found such a unique and spectacular sound right from the start that I hoped and prayed it would continue and the band wasn’t some flash in the pan. It took a couple of years for the band to record a new album but the wait is finally over and here is a brand new LP.

The band, which consists of three guitarists; one bass player; and one drummer, craft delicate instrumental layers of sound. The music is very complex and atmospheric like cascading waves of sound layered over steady drums and a tight rhythm section. They’ve really taken their post-rock instrumental sound to new heights on this and not only stepped it up in terms of intricacy but sped up the pace and thickness of their sound in certain tracks too. The band isn’t afraid to get heavy too, but never to the extent of being riff heavy like early Pelican, instead they fuse the heavy repetitive parts into climaxes for some songs which is an extremely satisfying payoff.

If These Trees Could Talk improved upon themselves in every way imaginable since their amazing first album with this new one; it’s simply breathtaking how the songs paint such vivid pictures of emotion and seem to tell stories without a single word being sung or spoken. The album is like taking a trip around the world seeing all kinds of new sights for the first time and feeling that sensation of exploration. These guys are the absolute best band in their chosen genre right now and Above the Earth, Below the Sky is going to be the benchmark by which all others playing this style of music will be judged.

The album contains ten tracks which all fit together like a puzzle and while each track is great on its own, the songs flow from one to another so nicely that I actually prefer to listen to the album in its entirety. I really have trouble trying to pick out a favorite song on here because I just enjoy listening to the entire thing so much. It sounds more like one big piece of work than a collection of songs.

While the band stepped up the quality of their sound, so did the label with the packaging of this LP. The album comes housed in a full color sleeve that has a beautiful glossy coating on it with the band name appearing to be laminated on the front. However they did the coating for the cover, it really makes the striking photography of the cover pop and looks beautiful. Inside there is a glossy full color inner sleeve that houses a clear vinyl LP. The Mylene Sheath has been putting out amazingly packaged records since they started but this one really stands out among the label’s catalog.

The album came in two editions, one on a blue color vinyl limited to 100 and the other is the one you see pictured here on clear with a run of only 300 copies. I seriously doubt they will be around long with as good as this album is. Kudos to If These Trees Could Talk for not suffering sophomore jinx and instead completely outdoing themselves!

If These Trees Could Talk – Above the Earth, Below the Sky LP

Simply put one of the most amazing post-rock instrumental records ever made and a stunning landscape of sound.

Check out the video for “Thirty-Six Silos” below.