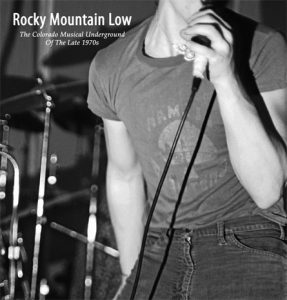 When you think about punk rock in the late 1970s one of the last places that would come to mind would be the Denver/Boulder region of Colorado. The same could also be said about Chicago. Back in the late 70s, all the punk rock that got any kind of attention came from New York, California, or the UK despite the fact that places like Denver and Chicago had scenes of their own going on.

Colorado did have a small little punk/new wave scene back in those days that very few people outside that are will likely have heard of especially if you weren’t there at the time.  Only the most rabid of historians would be able to enlighten you to this obscure little scene that happened 30 years ago and a pair of them got together to put together this package known as Rocky Mountain Low.

Unlike similar compilations that either try to document a single type of sound or increase the value of some bootlegger’s record collection (ie: the KBD series), Rocky Mountain Low attempts and succeeds in documenting an entire scene from the late 1970s in the Denver/Boulder area. I can think of no other examples of anyone who even attempted such a daunting task. What’s even more impressive is the fact that they succeeded in their quest.

There are two parts to the Rocky Mountain Low package: a booklet and a compilation album. The booklet gives not only a great history lesson on how the little punk rock scene in Colorado came to be but also a detailed band history of every band in that scene. I learned so much from reading those 24 pages of small print that I almost feel like I was there at the time, it was that detailed! It would seem that the scene centered around a couple of records stores, the most prominent being a store called Wax Trax which was started by a couple of guys named Jim Nash and Dannie Flesher. Sound familiar? Those Pied Pipers of punk rock did the same thing in Chicago after they left Colorado!

The book took me quite some time to read despite only containing 24 pages because it is crammed with information and uses a small font so they packed as much as possible in there along with some great old photos of the bands. As a huge fan of old punk rock and music in general it was a very fascinating read and extremely well-researched. The booklet alone easily is worth more than half the price of the package, it’s that good.

The compilation (in the form of two vinyl LPs) features 32 songs from nearly every band covered in the booklet, I say nearly because one band wouldn’t allow their recordings to be used and a couple of others simply had no recordings of any kind known to exist. The music is mostly of the 70s punk style and some power-pop too. You can liken this in a way to the Dangerhouse comps in the way that most of the bands sounded different from each other and drew their sounds from different influences but still fit well together in the bigger picture. Some of the real standouts on the compilation include Ravers, Front, Jonny III (my favorite track on this comp is by them), DefeX, Lilly Rose & the Thorns, and Healers (which featured a pre-Dead Kennedys Jello Biafra!). The comp is a treasure chest of rare recordings, many of which should have been released as 7″s. Speaking of which, thanks to this compilation my want list has grown by a few records now after hearing this compilation and reading the booklet.

The sound quality of the various recordings range from really rough (one song), to good, to excellent with most falling in the very good to excellent category. The material provided for this compilation came from a variety of different sources and was painstakingly cleaned up and restored to the best of the ability of modern technology. A lot of time and money was spent on this project and the results are excellent.

Any fan of old punk rock who is also a music history buff needs to have this in his/her collection as does any fan of 1970s punk rock/new wave rock and roll. The people behind this release deserve to be supported for spending so much time and money to put out something documenting a scene so obscure that most people didn’t know it existed. I’m a huge fan of these type of historical documents and these guys went above and beyond the call of duty in producing this one.

A completely thorough historical document of a small musical scene that contains some wonderful recordings and an incredible booklet.