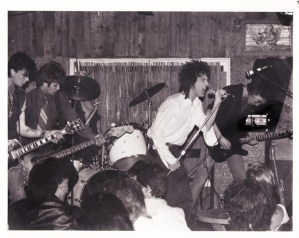 Those of you who are fans of the first wave of Los Angeles punk rock likely know who Rik L Rik is. Rik was in F-Word, he was the second singer in Negative Trend, and then had a brief solo career that had a couple of starts and stops. If you want to catch up on a little bit of Rik L Rik history check out this piece I put together awhile back.

Some time after the Beach Blvd compilation was released, Rik started going in a more psychedelic rock direction and actually had a deal in place to do some demos for Chrysalis Records. He went into a studio and recorded a few tracks that I don’t think were released and then he stopped playing music again. Ten years later Posh Boy Records acquired the tapes and also discovered some additional unreleased recordings Rik had made and released it as The Lost Album on an LP that probably not a lot of people own (something that really should be a crime as it’s a great record). Sadly Rik passed away in 2000.

Well for the albums 20th anniversary it will be released as an expanded edition and remastered in a digital only format. Posh Boy Records has generously made a rough edit of the album available for a free download for a limited time! When the album’s final edit is completed it will be released through the usual digital music services such as iTunes. Sorry, no vinyl this time out, but at least your iPod will be better off with this music on it.

Download the album right here (right-click it and save).

Check out the Posh Boy Records website (though it hasn’t been updated in a long time, it does have some great information on it).