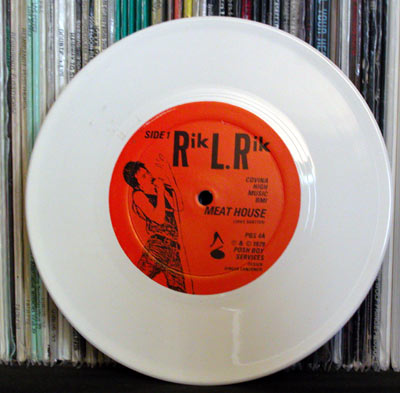 Rik L Rik (real name Richard Brian Elerick) was around in the beginning of the Los Angeles punk scene and was in a band called F-Word. He was mentioned quite a bit in The Germs biography that came out a couple years ago. After F-Word called it quits in late 1978 Rik would leave for San Francisco and join Negative Trend. That band’s sole recorded output would be one 7″ and a couple tracks on the Tooth and Nail compilation (which will be featured here one of these days).

After he quit Negative Trend, he went solo and put out a this really great 7″ on Posh Boy Records, and was also on the Beach Blvd compilation. It was at the recording session for this single that those Negative Trend tracks were recorded for the Tooth and Nail compilation and were remixed by Chris D (of Flesheaters fame, who released the comp on his label, Upsetter Records).

I asked Posh Boy himself for a little recollection of this and here is what he said:

Owing to shortage of funds I had to choose between printing the picture sleeve for Rik single and that of Simpletones. In fact, when the artwork for the Rik single was done, it was a Negative Trend single. Rik left the band between the recording and the record’s release. So that played a big factor. The Tooth and Nail tracks are from the same session as the Posh Boy single… the only difference being that Chris Desjardins wanted to remix. He, of course, used the band name “Negative Trend” whereas I wanted to promote Rik and the remaining members of Negative Trend wanted to disassociate themselves from him. So we pressed 1000 of the PBS 4, the Rik L Rik single and it just did not sell. That’s why I offered them free to anyone guessing what the letters TSOL stood for. It would have been a beautiful black and red pic sleeve, we adapted the artwork for the 1990 re-issue. Artwork by Ginger Canzoneri

Years later, Posh Boy would release The Lost Album by Rik L Rik which was a collection of songs he recorded in the early 1980s. Sadly, Rik passed away of cancer in June of 2000. He was in the process of recording a record with The Celestials before he died but it never got finished before his untimely passing. There is a tribute page for Rik up on the Posh Boy Records website.

Listen to “Meathouse” from the record