A Forest of Stars – Opportunistic Thieves of Spring 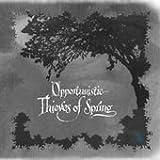 A Forest of Stars – Opportunistic Thieves of Spring
Transcendental Creations

UK black metal band, A Forest of Stars celebrate their third birthday with their sophomore effort, Opportunistic Thieves of Spring. Black metal is far too vague of a description though as while their foundation may be that of black metal, they incorporate outside influences into their sound.

The group infuse elements of psychedelic, goth, and progressive rock into a shell of black metal and the result is a very interesting and diverse range of sounds. The music doesn’t follow the typical formula for any style of metal at all. There are numerous tempo changes, quiet and ambient portions,  melodic soothing parts, and a lot more.

All the songs on the album are at least eight to ten minutes long which gives the band plenty of time to explore a whole world of sound and emotion in each song. The mix of the guitars with violin makes for a great dynamic where it seems like beauty and darkness are simultaneously prodding at the listener demanding attention, then the next thing you know the song goes in a completely different direction and double kick drums will enter the equation and the sound gets ugly (in a powerful and good way, where black metal is ugly and cool). Just when you start getting into that part, the band turn left and take you somewhere else.

The vocals are mixed kind of low and are a sort of low-pitched shriek or growl instead of the high-pitched screaming found in a bunch of black metal. The vocals have a sort of eerie way about them which really makes for a sort of dark atmospheric tone in the songs. The songs sound like something out of a dark fairy tale and the entire album wasn’t anything near what I was expecting.

It’s really nice when a band comes along and takes chances with their sound and aren’t afraid to really venture out there to see where the journey takes them and A Forest of Stars seem to be on a good path, one that I plan to follow them on if they keep making records this interesting.

A Forest of Stars on myspace

A Forest of Stars on iTunes

A wonderfully satisfying journey into mostly uncharted waters for metal.