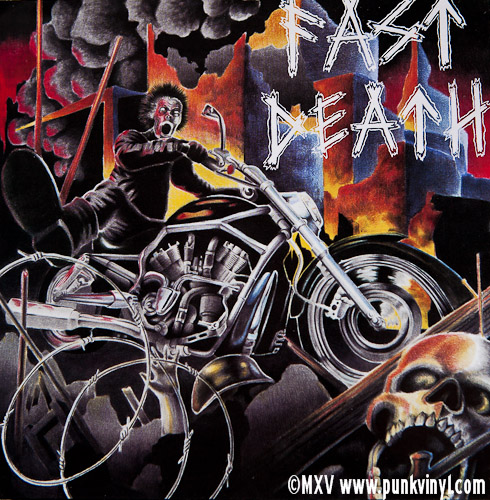 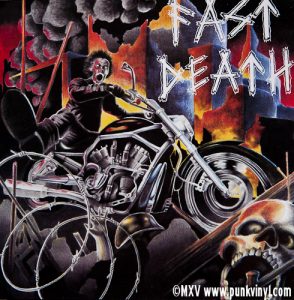 Boston, MA used to be a hotbed for hardcore punk for a spell back in the early 1980s and a lot of fine bands came from that area. Apparently hardcore is still alive and kicking in the state of MA because now Boston’s latest offering is the band, Fast Death.

Fast Death play super fast hardcore thrash with a meaty low-end and squealing guitar leads. It is hardcore thrash with a hint of metal leads in the guitars. The songs are shot out at a rapid-fire pace and they at times sound like a less metallic His Hero is Gone. In fact, had the production been better on this, I bet they would actually equal that band in terms of low-end powerful thrash.

The band stays true to their genre and this single is nonstop energy from start to finish. It has an old school thrash feel which works to the band’s favor as did their keeping the metal leads to an absolute minimum. I would bet that while enjoyable, this single probably doesn’t do the band justice in terms of what they would sound like in a live setting and I bet they are even heavier live.

This 7″ contains five songs, all similarly paced so if you like anything by this band, you’d end up enjoying the entire EP. This format is perfect for a band like this, it is short and to the point and gives you just enough to be satisfying without it getting tiring. The record comes on black vinyl and is housed in a fold-over sleeve with the lyrics and some photos printed on the inside. Overall a pretty enjoyable thrash record and a band that is likely worth checking out live.

Old school hardcore thrash that would also appeal to fans of His Hero is Gone.