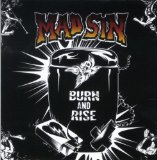 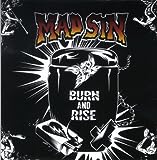 Mad Sin – Burn and Rise
People Like You Records

Mad Sin has been around since 1987 but somehow despite the fact they released ten studio album prior to this one, this is the first I’ve heard of them. The band is a German psychobilly band  who apparently were pretty  well-known not only for their music but for their reckless lifestyle.

Burn and Rise is at its core a psychobilly album. The songs are mostly fast tempo and a little short and to the point. They do slow it down on a couple of numbers too that almost have a country influence to them but without the cheesy trappings of that genre. A lot of the faster songs have a definite punk influence in them too which they blend well with the traditional psychobilly sound. I liked their use of samples too which help give them a sort of B-movie sound and theme to their image and sound.  If you are a fan of modern psychobilly bands it is a safe bet you’d really enjoy Mad Sin because they probably influenced a lot of the newer bands.

The CD comes in a standard jewel case and has a big fold-out booklet that contains all the lyrics and some really great artwork and photos. The album has 19 songs and is a fun listen from start to finish. The energetic music will really get your blood flowing and your feet tapping and I would lay money on this band being a really fun live band as well. Any fan of psychobilly will likely find a lot to like about this album.

Mostly fast-tempo, punk laced psychobilly in an attractive package. It’s easy to see why they’ve been around so long.