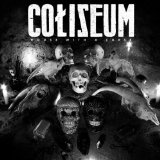 Coliseum – House with a Curse 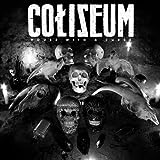 For their third full-length album, Coliseum has changed drummers, producers, and labels, and even their sound. That’s a lot of change in a short amount of time and House with a Curse is the final result of all of it.

Coliseum play melodic metal/post-metal that is really catchy yet still maintains a sense of power. The guitars are kind of drone-like at times and have some crunchy riffs. They sort of fall into that post-punk kind of thing that bands like Jawbox made an art form out of. The drums are fairly prominent in the mix as well and are full of all kinds of cool fills and tempo changes all while maintaining a hypnotic beat. The vocals are gravelly and a bit hard, yet equally melodic. as the singer deals with all kinds of personal topics. The vocals remind me a bit of Deadguy with a lot less anger and aggression.  There is a lot of variation between songs too which keeps things interesting and fresh.

The album also features a handful of guest musicians who contributed vocals or other instruments to various songs including J. Robbins of Jawbox and Peter Searcy of Squirrel Bait (the latter contributed cello to the opening intro and some additional vocals on another song). The addition of these musicians was like that extra sprinkle of topping on an already delicious sundae, it wasn’t necessary but it sure made it taste that much better.

If this is the path Coliseum sticks on, I can see a bright future for these guys. House with a Curse shows that if there indeed was a curse with this band, they sure did a good job shaking it and that all the changes they went through was worth it.