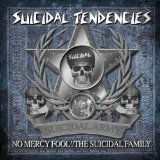 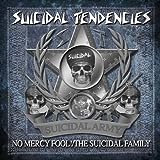 A re-recording of songs from their second album and some unreleased No Mercy songs that while not terrible, was completely unnecessary.
Rating:

Suicidal Tendencies has the distinction of releasing one of the most popular and excellent punk rock albums of all time, their self-titled album on Frontier Records. In the 25 or so years since its release the band has gone through numerous lineup changes and found themselves evolving rather quickly from a hardcore band into a metal band in their subsequent releases. They went from being “Institutionalized” to becoming a thrash metal institution in the late 1980s/early 1990s. It seemed for every hardcore purist they pissed off and lost as a fan by “going metal”, they replaced with just as many fans who liked their metal stuff as much as people like me loved their first album.

In 1993 the band decided for some unknown reason to re-record and re-release their entire first album but with the current lineup at that time. This was perhaps one of the worst ideas in the history of music. That album was perfect and no one in their right mind could ever think they could replace a classic with some cheap and modern imitation and have people accept it, let alone prefer it. You’d think the band would have learned its lesson but apparently history now repeats itself with this release though it is far less blasphemous as their first attempt at this.

No Mercy Fool!/The Suicidal Family is a new album full of re-recordings of Suicidal Tendencies songs that appeared on their second album, Join the Army, along with re-recordings of songs that were to have appeared on the unreleased second album from No Mercy, which was an affiliated band that Mike Muir sang in when they sacked their original singer after No Mercy guitarist Mike Clark joined Suicidal Tendencies. Once again the band has taken old songs and re-recorded them and again the question is why? The Join the Army album isn’t rare and it is still available. The only unavailable material is the No Mercy songs which were unavailable only because they were never recorded in the first place as No Mercy.

The music on this is pretty punch thrash metal with a bit of funk in the bass lines. It is fast and pretty powerful just like it used to be, and still is now in its altered phone. Because I wasn’t a big fan of the Join the Army material, this reworking of the material is far less offensive to me as when they did it to the first album but the motive behind this release remains unclear. Did the band want a new album out but weren’t able to come up with compelling new material? We’re they of the mindset that they got the shaft on their deal for Join the Army and hoped to rectify it by putting out their own reworked version of it? I think a new live “greatest hits” type of album would have made more sense.

Dedicated Suicidal Tendencies fans who can’t get enough of the band might find this album full of new versions of old songs they loved kind of interesting while diehards and purists will likely be against it. It’s nice to see the band has dusted off the cobwebs and decided to be active again, but there was a lot of other ways they could have kick-started their return that would have been a better idea than this.